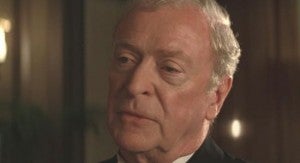 Following the release of The Dark Knight Rises -- which came out yesterday on DVD, Blu-ray and digital download -- everyone asked Christian Bale and Anne Hathaway whether they might return to appear in the next installment of the Batman mythology on film. For Bale (as well as other actors in the series), the answer was always "If Nolan wants me, I'm there." For Hathaway, it was "if the right people are involved."

Well, now Michael Caine, who played Alfred Pennyworth in Nolan's Dark Knight Trilogy, has expressed a desire to remain on as Bruce Wayne's gentleman's gentleman when the next group of filmmakers take their swing at the Caped Crusader.

Caine, a two-time Academy Award winner, is on the record as saying that he didn't particularly feel like it was a great role when it was first offered to him. Rather, he worried that all he would be doing is acting as a butler, rather than the father figure that Alfred plays to Batman in many versions of the stories, including Nolan's. And even though he wants in regardless of whether Nolan is doing it or not, he gives the director plenty of credit for bringing more to the role than in previous screen adaptations.

“The thing about Chris is he’s not a normal blockbuster director,” said Caine. “Normally when you get these blockbusters, they spend so much money on the stunts and the scenery, they haven’t got any money left over for actors so they never write any great dramatic parts in. But everything in his movie is written like a drama. You could take it out and make a movie about that, the relationship with the butler.”