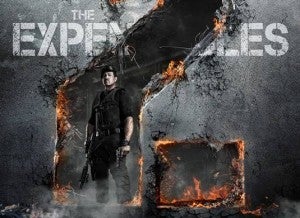 The first TV spot for The Expendables has aired, and it seems as though the film, having heard the criticism that they didn't really tell you anything about the first movie and that all the commercials just focused on names, has tried to temper that a bit. While the impressive cast list takes the entire duration of the ad to get through, there's plenty of banter, explosions and general male bonding going on in between.

"Mr. Church reunites the Expendables for what should be an easy paycheck," reads the official blurb that accompanies the ad on YouTube, "but when one of their men is murdered on the job, their quest for revenge puts them deep in enemy territory and up against an unexpected threat."

The film has been in the headlines already once today, with distributors Lionsgate confessing that they're considering developing a TV version of the franchise--likely without the harem of aging action megastars that make the movies so irresistible.

In addition to the staples from the first film, we get the addition of Jean-Claude Van-Damme and The Hunger Games star Liam Hemsworth (brother of Thor, the god of thunder). If this movie is anything like the last, it will be fun, exciting, filled with dandy catch-phrases and barely comprehensible.

The Expendables 2 Brings on the Male Bonding in TV Spot