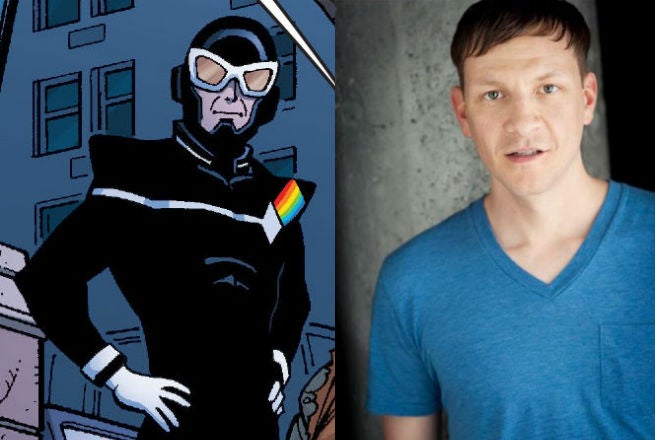 The Flash's TV version of the Rainbow Raider, who will appear in the upcoming episode "Flash vs. Arrow," will be played by Paul Anthony, the network announced today in an updated listing for the episode.

Last night, information about the show was released, but Patrick Sabongui, who plays Captain David Singh in the series, was named as the actor playing Ray (not Roy, as in the comics) Bivolo.

According to IMDb, which is often unreliable in cases like this but has had a decent track record with The Flash of late, Bivolo will go by the name of Chroma in the episode. In the New 52, Bivolo uses the name Chroma in his few appearances so far. Prior to the Flashpoint relaunch, that name was taken by an Infinity, Inc. villain -- a cosmic entity with a motif that was similar to Rainbow Raider's.

In his first appearance -- the Villains Month Grodd one-shot -- Chroma was decapitated by Grodd, his head left on a spike as a warning to other Rogues. Given that a pre-powers version of Grodd recently appeared on The Flash, it wouldn't be entirely shocking if history repeated in that respect as a way to introduce the gorilla to the Arrowverse in a big way.

According to the synopsis for the episode, Bivolo will have the ability to manipulate emotions, and will turn The Flash against the city, leading to a task force being formed to stop him -- but Team Flash is convinced that only Arrow can do so.