As The Flash enters the final few episodes of its first season, one would think that the Easter eggs, references, winks and nods would start to peter out a bit because there's so much going on in the plot.

One would be wrong, apparently; the show today featured guest stars from Arrow, a new DC villain, and a number of overt references to DC lore...some of which is either new, or hasn't been referenced in long enough that we'll have it below.

Cisco and Joe went to Starling City, home of the Arrow, this week, and there were many, many references to what's going on on that show.

Barry apparently made quite a trip to get pizza -- to Green Lantern's hometown!

Apparently, Coast City hasn't been destroyed in this timeline. 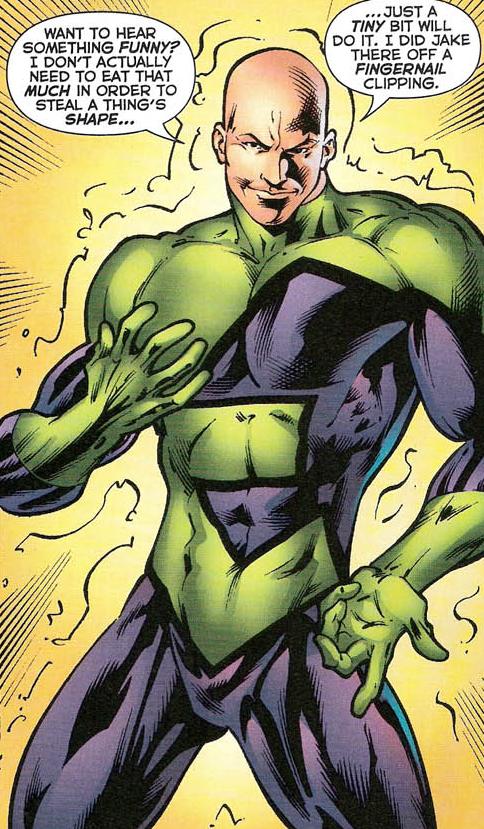 Hannibal Bates is one of DC's less pleasant shapeshifters.

In the comics, he first appeared in 52 and was part of Lex Luthor's Infinity Inc., a group of metahumans gifted powers by The Everyman Project, which gave everyday people powers -- which Lex could control or even turn off.

After the project was cancelled, Everyman was one of the last remaining members to retain his powers.

Of course, in the comics it wasn't enough to just touch the person he transformed into; he had to eat a small part of them, which led to some pretty gross stuff.

By putting the sonic device Sara had used in Arrow on a necklace, it gives Laurel the opportunity to use it in a manner closer to what Black Canary has in the comics -- a "sonic scream," which doesn't require her to carry around additional equipment. In the comics, it's a superpower, although if memory serves, they've used technology to duplicate it before when she temporarily lost it.

Also, most costumes for the comic version of Canary has a choker that looks like that, so we're bringing the costume closer to canon.

Whenever time travel happens, there's apparently tachyons before and after that alter gravity and physics, particularly as it applies to liquids. It happened on the night of Nora Allen's murder, at the particle accelerator explosion and in a few other cases.

Not technically a DC reference or Easter egg, but whenever there's a big pop cultural reference like Cisco's Battlestar Galactica exclamation, people in the comments want it counted...so we count them now.

The Flash: Easter Eggs and DC Comics References In "Who Is Harrison Wells?"