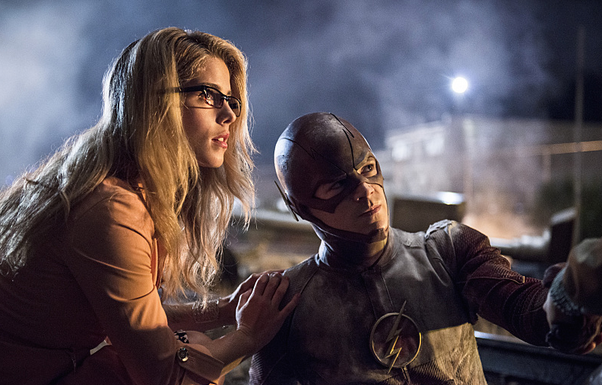 Barry Allen and Oliver Queen will have something new talk about on this coming season of the Flash: "spunky" and "funny" girls.

It was revealed earlier today that Barry Allen will receive a brand-new love interest for his sophomore season, one that should strike a familiar chord with Arrow and Flash girls.

The woman in question is Wendy, a new character that the CW described as a "spunky, fun, and funny" romantic interest. As a smart and scientific addition to Central City's police force, Wendy should be seen as The Flash's very-own Felicity Smoak—the scientific and snarky love interest to Oliver Queen on Arrow--according to the CW.

Of course, Wendy will throw a monkey wrench into the ever-evolving romance between Barry and Iris. It seemed that the destined lovers might have finally make it official after Eddie sacrificed himself at the end of Season One, but this announcement suggests otherwise.

What do you think, readers? Is DC's television universe big enough for two Felicity Smoaks?

The Flash returns for its second season this fall on The CW.

The Flash Is Looking To Cast Its Own Felicity Smoak

My Hero Academia Gives the League of Villains a New Name

One Piece Fully Unmasks Yamato for the Anime