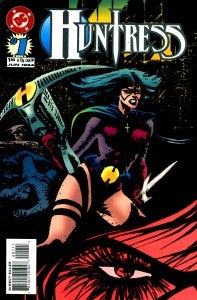 "What I've loved most about Helena Bertinelli is that she was a dark mirror to Batman, without going down the Azrael saga route. I've always liked her growth, starting with seeking Batman's approval and moving further and further away from it, reaching contentment with her own desires and goals. She's always been a very strong, wonderfully flawed, terrifically passionate woman, and the contradictions inherent in her character have always exerted strong gravity on me when writing about her. I'll miss her." That's what longtime Batman family writer Greg Rucka had to say about Helena Bertinelli, the post-Crisis on Infinite Earths Huntress who appears to have been written out of the continuity of the new DC Universe, in a conversation with DC Women Kicking Ass, a popular blog about...well, just what it says on the tin, really. And it got me to thinking--building that kind of relationship with characters is one of the joys of serialized storytelling and, by extension, one of the appeals of Big Two superhero universe comics. When, over a period of years, you build a relationship with a fictional character it's easier to love them even at their worst--when a story doesn't make sense or there are a few months of bad art. It's one of the things that critics are frequently decrying about mainstream superhero fare--that fans will read a crappy book, complain about it, and keep reading because they're in the habit. Something similar happens in television, which is the only other medium where stories are serialized with anything like the regularity of comics. Depending on the network it's on and the success of the show, you can get anywhere from six to twenty-four episodes of a television series every year, just like depending on how many titles a character stars in you can get anywhere from twelve to sixty or more annual appearances in the comics. Seeing that character go through a hundred or more "adventures," fans can develop a relationship with them even if the character or the show is objectively not that well-done. When Lowell Mather, Thomas Haden Church's character on the '90s sitcom Wings, was written off, it was done in what seemed like a hasty and out-of-character way for the show. Still, the episode overcame its shoddy concept and was well-executed, and by the end of the episode anyone who had been watching the show for the previous six years was likely to be at least a little choked up by his departure. In the same way, events that are objectively probably good ideas can be painful for fans who have an emotional connection to characters the story affects. Those of us who grew up on Wally West as The Flash have been less-than-thrilled that there's been no sign of him in the post-Flashpoint DC Universe, and that DC has recently announced there are no plans for that character--or his contemporary Donna Troy--in the foreseeable future. If it were as simple as Bucky surrendering the role of Captain America back to Steve Rogers after two years of strong stories, fans would be somewhat more forgiving (as has happened in Ed Brubaker's Marvel titles), but after more than two decades of having a monthly fix, fans of the character are unhappy with his absence and uncomfortable with Barry Allen--who they perceive as the stranger headlining Wally's title. In an effort to head that off, publishers have a tendency to try and use every character in their arsenal, all the time. There was a sense that, following the cancellation of Marc Andreyko's fantastic and original take on Manhunter, it was better to have the character appear in the background of shots in Justice Society of America, a title where her personality would certainly not fit, than disappear completely.Yet, one of the things that made Andreyko's Manhunter so memorable was that--like her distant cousin Starman before her--Manhunter picked up strays along the way. Just as Jack Knight employed The Shade, Enlongated Man and a number of other old-time characters long out of the limelight, Andreyko made use of Cameron Chase, Director Bones, Obsidian and a number of others. Part of the power of these characters were the original personalities and quirks Andreyko gave them--and part of the reason he was able to do so with existing, established characters is that they had been gone for long enough that the publisher and fans were comfortable with them being reinvented a bit in order to bring them back into the fold. You can see the other way of doing things at play int he New 52--a world where everything was billed as bold and different but where creators have spent six months parading guest stars through their books to ensure that as many characters from the pre-relaunch DC Universe as possible are reintegrated into the New 52 as quickly as possible. It really stretches the plausibility of a world where not a one of them was active a decade ago, though, and snarling the timeline to accommodate that will just create more continuity issues. Which will lead to more Crisis-level stories and more relaunches. Because if there's one thing comic book fans love more than their characters, it's their continuity.

The Flash, The Huntress and Building a History With Characters