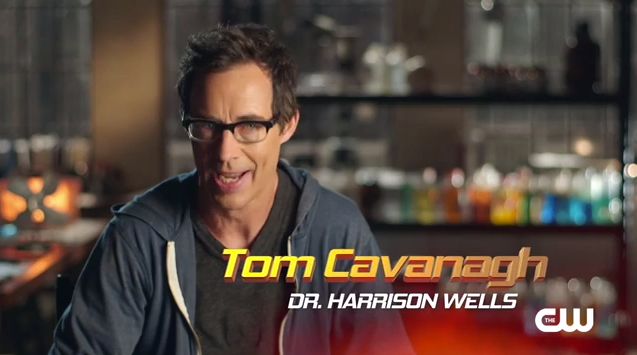 (Spoilers below for last night's midseason finale of The Flash)

Even Tom Cavanagh can’t deny that The Flash’s Dr. Harrison Wells is a pretty sketchy guy.

In the latest installment of The Flash’s behind-the-scenes web series, "Chasing Lightning," actor Tom Cavanagh, who plays Wells, discusses the many mysteries involving his character. Cavanagh specifically references the pilot episode’s closing scene, when Harrison Wells rises from his wheelchair and reads a  future newspaper article announcing the Flash's disappearance.

“Clearly, there’s something more to it,” Cavanagh said.

That “something more” is most likely the fact that Harrison Wells is The Reverse Flash, the Man in The Yellow Suit who murdered Barry Allen’s mother. The revelation was made at the end of last night’s midseason finale, when Wells opened a vault containing the Reverse Flash costume and spoke in the same tone that Reverse Flash used earlier in the episode.  But the news that Barry's mentor is also his archnemesis only made Cavanagh’s other comments more puzzling.

“From what we’ve seen, he has Barry’s interests and protection at heart. Even if you were not a comic book fan, you would be satisfied with what we attempt to do,” Cavanagh said.

Since this video was released yesterday, before the midseason finale aired, Cavanagh was most likely playing dumb to avoid spoilers, but there are probably many more surprises to come later in the season. Check out the video below for the actor’s full thoughts.

WWE WrestleMania 37: Latest Update on When Tickets Go On Sale