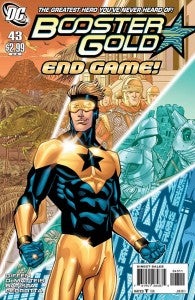 #43, which hit the stands on Wednesday, signals the end of the Giffen-DeMatteis era on the character's monthly title. On the same day, not only did the storied creative team's first arc on Booster come out as the Booster Gold: Past Imperfect trade paperback—but so did the most recent Booster Gold story by the former-and-incoming creative team of Dan Jurgens and Norm Rapmund, Time Masters: Vanishing Point. Along with the most recent (and penultimate) issue of Judd Winick's Justice League: Generation Lost, it was a big week—maybe the biggest week yet—to be a Booster Gold fan. As usual, co-writer J.M. DeMatteis joined us to discuss the issue.

The Gold Exchange: So this story takes place AFTER Booster returned home safely, having served five years (and then some) in prison? Is it safe to assume the conversation with Rip Booster alludes to in the opening narration simply didn't appear for space reasons?

GX: I'm not a Legion of Super-Heroes devotee. Can you briefly describe the history of the Time Institute?

[Editorial Note: I had the same impression, and so checked the Internet a little. According to Comic Vine, the location first appeared in 1989 and has been in action as recently as Legion of Three Worlds and the newest Legion of Super-Heroes series.]

GX: A pacing question: With all the elements that had to be cut for time and space recently, why spend so much time on this fight with Validus? Is it just to give the narrative boxes space to work themselves out or because you hadn't really given the artists much in the way of big action sequences recently?

JMD: Chris Batista really wanted to draw the Legion, so this was a chance for him to show them in action against a classic LOSH foe.

GX: Another kind of weird Legion question: Is there a particular era, story or battle that Booster is interrupting here? Or did you guys just use "Legion fighting Validus" in the outline?

JMD: This particular Validus battle is specific to our story. I think. I hope.

GX: The LoSH immediately jumping to the worst-possible conclusion and attacking Booster while he's trying to save lives feels a little cynical. Or maybe cynical is the wrong word, but it feels like something out of The Life and Times of Savior 28. Are you feeling a general wariness of traditional superhero tropes creeping into a lot of your writing these days?

JMD: Not particularly. And I really didn't find that sequence cynical. I saw it more as comical: a huge blunder on the Legion's part...and more bad news for Booster.

GX: Proty really IS kind of creepy-looking if you think about it, isn't he?

JMD: You mean you don't like the idea of a Giffen-DeMatteis-Batista Proty mini-series? Well, there goes that idea!

GX: And you know--I never really thought about Brainiac 5 and J'Onn being kind of similar before but when you come to it, they're really much more similar than Brainiac 5 and, say, Brainiac, aren't they?

JMD: That just popped up in the dialogue. The dynamic between Brainiac and Booster seemed similar. And when you throw in the green skin...well, I couldn't resist the reference.

GX: So...Booster is Rip's father. And he's Supernova (sometimes). And he's The Perforated Man. Also, he's teamed up with himself at least once in the last few years. Looking at those haircuts--what're the odds one day he'll be green and it'll turn out he's also Brainiac 5?

JMD: It's comics. Anything is possible, no matter how ridiculous! (Kind of like life, when you think about it.) But, for the record, there's absolutely no truth to the rumor that Giffen is Booster. He wears that spandex suit for the sheer fun of it.

GX: Even by time-travel standards, it makes my brain hurt when I try to think of the logistics of the relationship between Booster and the LoSH. How many times do you think Booster and Brainy will have to argue over that ring?

GX: After years of writing Booster and Beetle as goofy kids, is the new "power" granted Michael by the aftereffects of the chronal leprosy kind of an in-joke? I mean--he's literally in a state of arrested development to some extent.

JMD: I hadn't thought of it. Truth of it is, that little twist was in response to a request from the Powers That Be. They wanted to make sure we kept Booster young...younger, actually, than we've been writing him...so that's what we did. Now he's Peter Pan...and it's actually very fitting, given his character.

GX: And did slowing the aging process do anything to help him out with some of the other needs that often seem to go un-served in Booster's life? Between the end of Time Masters and the end of your run onBooster Gold, we get that he hasn't had time to eat, rest, see his "kid" or clean his uniform in Lord-knows-how-long!

JMD: I know. You should smell that uniform. Awful!

GX: Are the "missing child" posters of Rani something that you planned to pay off, had you had a longer run, or just an acknowledgment that she never came home?

JMD: It was just our way of leaving a little plot crumb that Dan [Jurgens] can either pick up or ignore.

GX: What's next for the team? Any plans for you and Keith to work on anything upcoming? And do you have any idea what Olliffe and Batista might be doing that our readers could follow when Jurgens and Rapmund come back to Booster?

JMD: Well, Keith and I are reuniting with Kevin Maguire to do a JLI "retro-active" one-shot. I should start scripting that next week. After that...who knows? Bottom line is I love working with Keith and, as I've said before, it's not the project that matters to me, it's the joy of the collaboration.

GX: It's funny--the licensed comic hadn't really been mentioned (that I can remember) since the first Jurgens run in the '80s. You brought back a kind of off-handed reference to it here. Any particular reason, or just for the easy joke about the writer change?

JMD: The idea we had for the last issue was that, at the end, we'd find Booster reading the licensedBooster Gold comic book...and hating it. The idea was that our entire run would turn out to be a comic book within the comic book. The last panel was going to be Booster tossing the comic in the trash and saying, "Thank God Jurgens is coming back!" We thought it would have been brilliant...AND it would have meant that Dan J could come in and pick up exactly where he left off, because none of our stuff would have actually happened...but the Powers-That-Be said no.

So the joke I threw about the licensed comic was my nod to the story we intended to tell. I even had Booster say "I wish they'd get Dan back"—but the line was cut . C'est la vie!

All in all, it was a fun ride and I wish Dan the very best of luck. Damn nice of him to let us have some fun—occasionally too much fun—with a character he created.