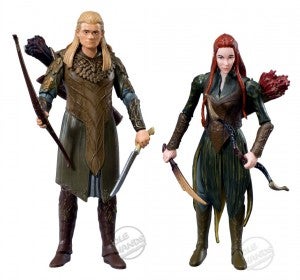 Tauriel, the character being played by Lost actress Evangeline Lily in Peter Jackson's trilogy of films based on J.R.R. Tolkien's The Hobbit, is one of the few characters from whom fans don't know exactly what to expect.

Having not appeared in the books, only what information Jackson or his cohorts have released is actually out there yet, and so any new kernels of information can potentially inform the way fans perceive the character going into The Hobbit: An Unexpected Journey, in which she'll first appear (albeit apparently briefly).

Some of this information is already widely known (or at least appears on the character's Wikipedia page), and some we've never heard before, but here's a dispatch from a fan who got a good look at some hot-off-the-presses action figures today and the boilerplate text that Warner Brothers included on the back of Tauriel's box:

"Ok, so Toys R Us put out their Hobbit figures today and I managed to read many of the backs of the pacakages.

"First, Evangeline Lily's character is the Captain of the Mirkwood Guard and she uses twin daggers.

"They stress that she is a fierce fighter but has a strong sense of right and wrong and will fight for what she believes is right.

"Also, her hair is going to be dyed red for the part (or a reddish brown)."

The biggest aspect of the story, then, is her characterization, which fits well with what you'd expect from Lily; her rank and weapons of choice are both already out there, and we've seen some promotional photos for the toys before now that gave the hair color.

What do you think? How will she fit into Middle Earth?