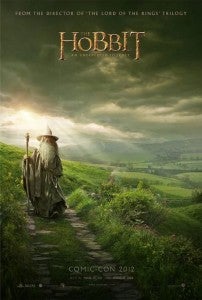 According to an article at Bleeding Cool, the U.K. release date for The Hobbit: An Unexpected Journey (Peter Jackson's highly-anticipated Lord of the Rings prequel) has been pushed back two weeks to open on December 26, rather than December 14 as previously announced.

But it may not be the case, as Bleeding Cool suggests that Film Distributors' Association may have simply listed the date wrong, and that the Internet Movie Database would likely use that site for a definitive date. Since More or less everybody else uses IMDb, the other places it's been cited as the 26th--such as a recent article in Empire Magazine--probably just used information from IMDb as definitive.

In the absence of an official statement about the change (or not) from Warner Brothers/New Line, a Tolkien fansite called Middle Earth News, which is generally at the tip of the spear on Hobbit news, have reportedly attempted to contact the studio for comment, but with much of the film's cast appearing at Comic-Con next week, it's likely fans may get their answer directly at the panel before the studio ever gets around to commenting on the matter.