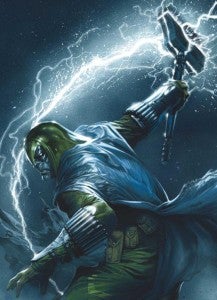 In a new interview with Click Online, The Hobbit: The Desolation of Smaug star Lee Pace, best known for his low-key roles in Breaking Dawn Part 2 and Pushing Daisies, discussed playing Ronan the Accuser, the Marvel villain he will take on in 2014's Guardians of the Galaxy.

"He’s a f---ing psycho!" Pace told the website when asked how he would describe his character. "He’s a real monster. I’ve had the best time playing this character. I’m glad its all on film and I never thought I could be so nuts in it!"

In a Marvel Cinematic Universe dominated by the likes of Loki, truly irredeemable villains have been a bit harder to come by--although certainly it seems that Thanos and Ronan are going to be pretty hardcore.

"James Gunn is just putting together a phenomenal movie and I’ve had the best time working with him on it," Pace added. "And yea we’ve made a monster of an alien!"

Guardians of the Galaxy is expected in theaters August 1. James Gunn said earlier this week that he expected to wrap principal photography today.

The Hobbit's Lee Pace Discusses His Guardians of the Galaxy Role