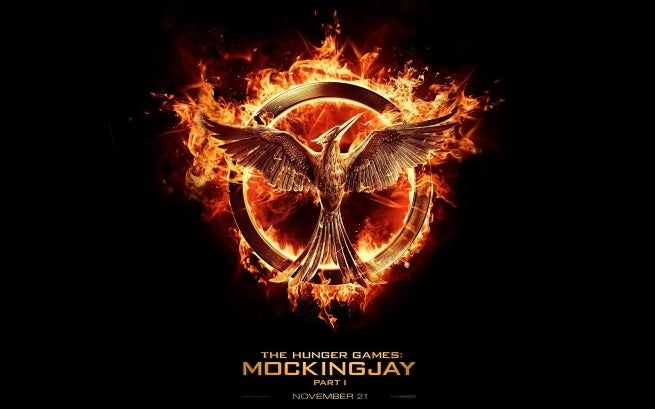 Spoiler Warning: It appears that The Hunger Games: Mockingjay Part One is taking a cue from Marvel Studios and providing some extra content after the credits have rolled.

Katniss Everdeen's Mockingjay pin is revealed on a black screen engulfed in flames. The bird inside begins to move and shifts into the triumphant flight pose seen in posters for the new film. As it does so, the wheel behind it begins to form spokes and spin. Finally, the Mockingjay breaks free from the wheel shattering it while flying away.

For audience members who have not read the books, this sequence will hold very little meaning. However, knowing what is yet to come in the series final installment helps to reveal that this sequence reflect Katniss' journey and foreshadows her final steps in The Hunger Games: Mockingjay Part Two. If you haven't read the books, there are spoilers beyond this point. You have been warned.

The Mockingjay in this scenario is obviously Katniss. It is the name she has come to accept as a symbol in the rebellion against the Capitol and the pin has followed her throughout the course of all three films in various forms. Its movements symbolize her transformation throughout the course of the story. At first she is stooped, supplicant to the system. The arrow clenched in the bird's beak shows that she is still capable of fighting back though. This is Katniss at the beginning of The Hunger Games. When the bird raises its wings in defiance, it transforms into the Katniss of Catching Fire who inspires the people to rise up against the Capitol.

Then the Mockingjay shatters the wheel that spins around it. This is what is yet to come. Even as a defiant symbol for the rebellion, Katniss is still trapped within a system designed to control her. It is only at the end of Mockingjay that she truly breaks free when she decides to kill the power hungry leader of the rebellion, President Coin (whose last name takes the same shape as the ring before it is shattered). Katniss is still trapped within the wheels of power at the end of Mockingjay Part One and will only manage to shatter them in all of their forms in the final installment of The Hunger Games next fall.

That's my take on it, at least.

The Hunger Games: Mockingjay Part 1 After The Credits Spoiler