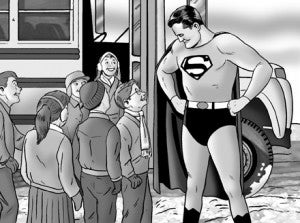 Probably the strangest single moment of the just-released Man of Steel trailer is the line when Jonathan Kent tells his son "Maybe" when he's asked whether Clark should have just let a busload of kids drown rather than reveal his powers to the people he saved.

It seems really bizarrely out of character, and it immediately sparked a lot of discussion, as well as a bunch of "Call Me Maybe" jokes, so we thought we'd round up some responses from the comics community on Twitter to give a sense for what people think is going on in that scene.

"Pa Kent straight up looked at Clark and said 'Maybe you should have let some innocent kids die.' That is a thing that happened," tweeted Joe Hughes from Comics Alliance, and I'll admit, that was my first concern as well.

Having read some other responses online, there are certainly more than one or two ways to read the line...and if it's as simple as "your secret is more important than their lives," it's entirely possible after the amount of discussion online today that the line could be cut from the final version of the film.

Comic Book Think Tank's Ron Perazza opined, "Pa Kent's "maybe" line in the Man of Steel trailer is great. It hints at how protective a dad can be...even when his child is invulnerable," which is an interesting read of the line, even assuming that it IS just as straightforward as it sounds and that most people wouldn't be happy with that kind of characterization from Pa Kent.

"Maybe Pa Kent is testing Clark," suggested Red She-Hulk writer Jeff Parker, and  touched off a series of responses from comics journalists agreeing with his assessment.

"It strikes me as Pa giving a lesson," tweeted Sparkshooter writer Troy Brownfield.

Far and away my favorite choice, though, came from Mike Sterling, who brought this to the table: "'Should I have just let them die?' 'Maybe.' (Pa Kent says nothing more, walks off.) [10 minute montage of Clark throwing buses into rivers.]"

That image will haunt and entertain me for days. It also inspired me to seek out the art up top.

The Man of Steel Trailer's Most Controversial Moment: What's With "Maybe"?