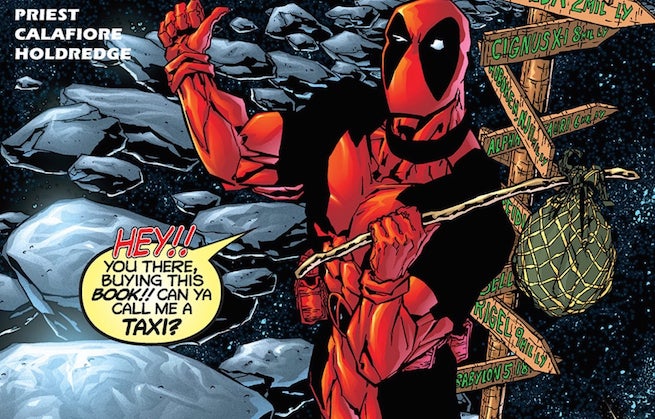 In case you didn't notice, Deadpool and his upcoming movie have been in the news everywhere lately. That means it’s time for another arbitrarily constructed list meant to inspire debate and/or frustrating longtime fans who know the subject infinitely better than some overworked writer.

If that intro felt a little too on-the-nose for you, it’s because this list both honors and explores one of Deadpool’s signature characteristics – his propensity to break down the “fourth wall” between the comic and the reader. In celebration, ComicBook.com decided to break the fourth wall ourselves with some insight (and humor. Please find this article funny.) into constructing a list of Deadpool fourth wall breaks (we naturally kept it to five, because who has time to ramble on longer than that?). 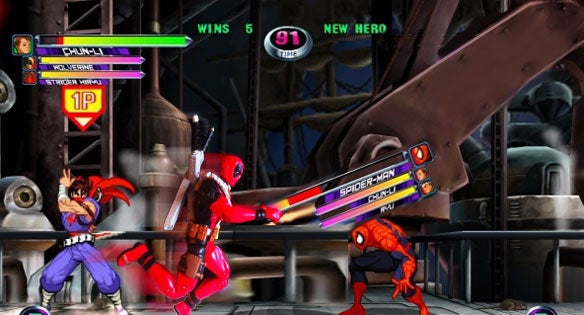 Honorable Mention: One of These Things Is Not Like the Other

Listicles will typically utilize an honorable mention where the author wants to discuss something that’s kind of related to the topic at hand, but is too fringe for the article's main theme. In this case, that’s Deadpool’s fourth-wall bust in the Marvel vs. Capcom 3 video game. Being the cosmically aware character that he is, Deadpool uses the game's energy bars and power meters to attack his opponents. It's clever touch from the game programmers, as it totally captures Deadpool’s archaic nature. But since the rest of this list will focus on comic book moments, this video game instance is relegated to the honorable mention pile. Also, that technically means this list has six entries, but we’ll continue to label it as five because honorable mentions don’t really count. 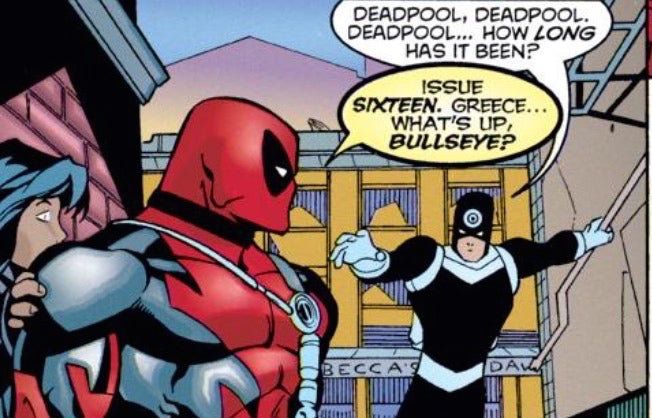 5. Leave Nothing To The Imagination

In this panel from Joe Kelly’s landmark run on Deadpool, the “Merc with a Mouth” (just worked in a nickname so we don’t have to write the word “Deadpool” twice in a row) acknowledges that he's a character in a serialized piece of fiction when he tells his adversary, Bullseye, exactly when the two last tangoed. While it’s a helpful guideline for the reader (to this day, editors will still use those little * notes to alert readers of prior events), Kelly dropped this line into Deadpool to mock tired superhero/villain banter and immediately cut to the chase.
This bit was ahead of its time and is still quite funny, but as its fifth-place ranking, suggests, it's pretty basic fourth wall breaking. 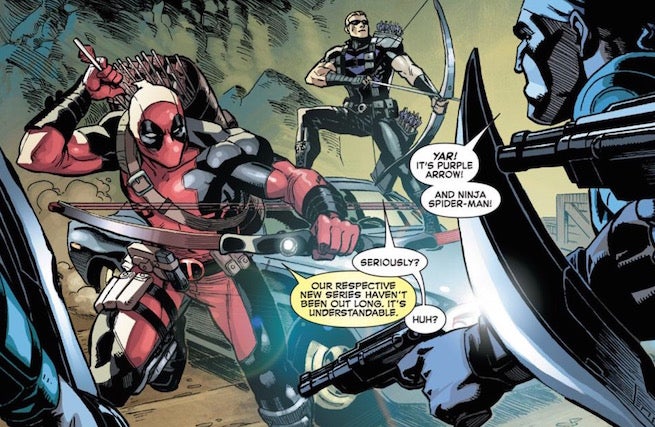 Building off the last entry (if you don’t know what I’m talking about, just scroll up), this issue of A+X features a team-up between Deadpool and Hawkeye that's derailed when an adversary misidentifies them as “Purple Arrow” and “Ninja Spider-Man.” For an extra turn of the fourth wall-breaking screw, Deadpool comments on the newness of their Hawkeye and Deadpool books, and how their lack of exposure has lead to the misidentifications.

The “Purple Arrow” comment is just an obvious poke at the fact that Hawkeye, despite his current “A” list status in the Marvel Cinematic Universe, is a blatant ripoff of DC Comics' Green Arrow. Meanwhile, Deadpool's crack on how his and Hawkeye's new books haven't developed a strong following yet reads as a good-natured swipe at the frequency of superhero comic reboots and relaunches.

Remember when we mentioned video game Deadpool fighting with energy bars (see, the honorable mentions do count!)? In the same vein, Deadpool has a habit of acknowledging his comic book status by referring to medium conventions like dialogue balloons and narration boxes (aka, “little yellow boxes”). Starting with Gail Simone's run scripting Deadpool, the character would converse with these little yellow boxes, and in some instances, argue with them (like I am with the person who keeps putting all this parenthetical information into this listicle. Stop doing that). Thank you. 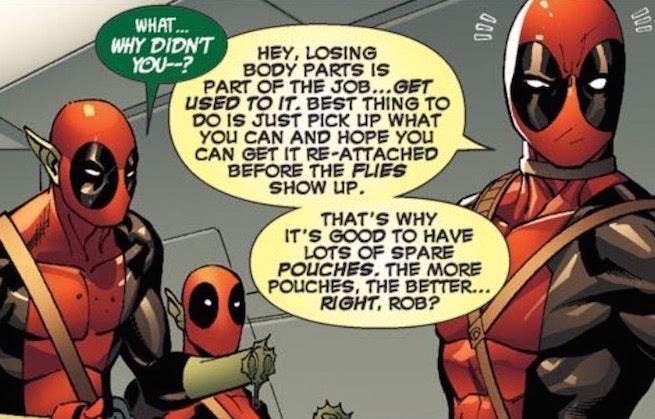 Deadpool is not the first comic book character to acknowledge his creator. An early Silver Age issue of the Fantastic Four actually featured Doctor Doom interacting with Stan Lee and Jack Kirby as part of his plot to conquer Reed Richards and company. But there’s just something smarmy about the way Deadpool smugly winks and nods at his creator, Rob Liefeld, that has a certain je ne sais quoi about it (French? Does this writer think he’s better than me?). A lot of that is due to Liefeld’s controversial status in the comic book industry. An artist who hit supernova status when he was practically a teenager, Liefeld gets credited for pioneering many 90s artistic trends that are derided by fans and critics today – i.e. oversized guns, disproportionate anatomy, and pouches. The Fantastic Four addressed the fact that Kirby wouldn't draw Galactus the same way twice, but Deadpool has never shied from a shot at Liefeld. And depending on where your opinion stands on Liefeld, that’s either very funny or mean-spirited. 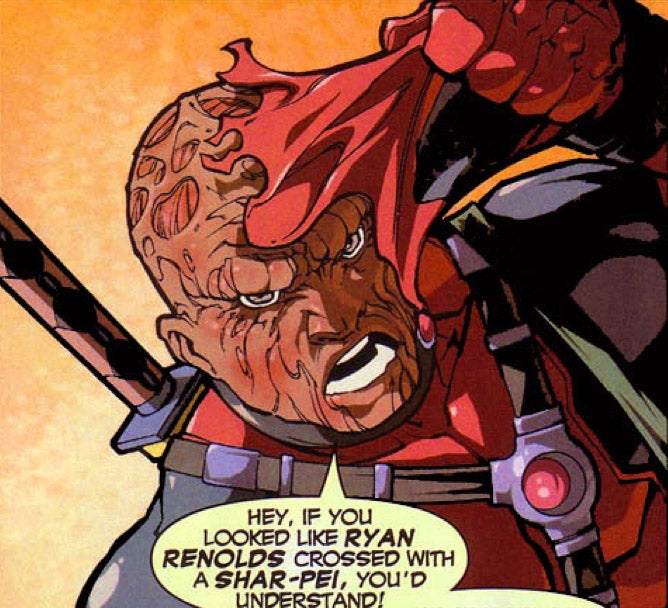 What better way to end a listicle that’s tied to recent Deadpool movie news than by listing a Deadpool film reference in the top spot?

Actually, what’s amazing about this panel is that it was published nearly seven years BEFORE Wolverine: Origins, the first movie where Ryan Reynolds portrays the “Merc With a Mouth” (before they took away his mouth for reasons that anger fans to this day). Did the comic’s writer, Gail Simone, have some kind of crystal ball that told her Reynolds would one day play Deadpool, or was she just making a cheeky joke about him at the expense of a random and handsome actor? Either way, acknowledging the real world outside of the fictional world of comics books, is, by definition, breaking the fourth wall. So coincidental foresight, this instance earns the top spot (and, as we said at the very top of this article, this list was explicitly timed to tie-in to the wave of Reynolds/Deadpool movies news).

The Merc With a Meta Mouth: 5 Ways Deadpool Breaks the Fourth Wall