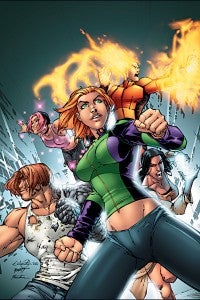 About a week ago, DC Comics announced that it was cancelling six titles from its New 52 line of superhero comics, and has not, as yet, announced what they might be replaced with. Replaced, you see, because DC has kept "The New 52" at fifty-two titles since the post-Flashpoint relaunch of their universe, giving fans a predictable 13 issues or so per week to sink their hooks into. The fact that six books are going away in May means that June should, barring a major shift in the company's publishing plan, see the launch of six new #1 issues. While one of those issues is going to be Man of Steel #1 from Batman writer Scott Snyder and former Justice League penciller Jim Lee, that still leaves a number of titles unaccounted for. So what might fans expect to see in their June solicitations? We've got some ideas. Gen 13 The final issue of The Ravagers hinted that there would be an important revelation made regarding Caitlin Fairchild's powers--something that DC brass have reiterated in interviews. What does that mean? Well, to longtime WildStorm fans it means that there's a good chance we'll see the end of The Ravagers and the end of Team 7 come together to build toward the beginning of Gen 13. A team made up of teen metahumans who were essentially kidnapped by a shadowy, governmental organization and forced to "activate" their powers, it later turned out that Gen 13 had ties to the mysterious Team 7 - a book that came later in WildStorm but which has been published for some time now as a flashback title in the New 52. With that book being cancelled at the same time we're getting "revelations" about Caitlin--who was the POV character for the first Gen 13 miniseries--it seems only logical that the two wouldn't be happening by accident. Also, short of Teen Titans, Gen 13 is probably the most recognizable brand of "teen" superteam that DC owns. The fact that it hasn't been used yet is frankly a bit shocking. 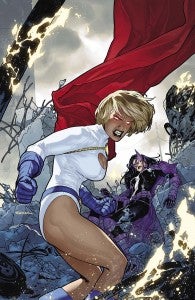 Power Girl With Man of Steel coming to the theaters and a ton of positive buzz surrounding it, it's not unlikely that DC will want to expand its somewhat anemic (at least relative to hits like Batman and Green Lantern) family of Superman titles. An obvious choice, since she's been part of a team-up book for quite some time in the New 52 but starred in a solo book back before Flashpoint--would be Power Girl. Her connection to Superman in the New 52 is stronger than ever--and we've seen her interacting with Supergirl in upcoming issues. Also--just think on this a bit--she's returned to the most iconic, recognizable version of her costume. Which is the kind of thing a person might do if they wanted to star in their own book. Superman/Batman See above, in terms of reasoning. DC needs to beef up its Superman line in case the movie is a success but ideally would like to do that with characters and concepts that have a proven track record of their own. With a strong creative team, or a rotation of strong creative teams, Superman/Batman could be a huge hit for DC...and when the post-Man of Steel Super-mania wears off, you'll still have the fact that Batman is in the comic to fall back on. Red Robin Once again--the Batman banner is DC's strongest and broadest right now, but one of the characters who doesn't currently have his own title is Tim Drake--the Robin who supported his own title for more than 20 years. This one's a no-brainer, folks, especially with rumors that Damian Wayne may not make it out of Grant Morrison's run--or at least may not be Robin at the end of it. 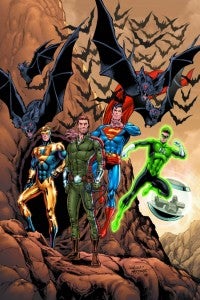 Time Masters With what appears to be a renaissance of the Multiverse happening in upcoming solicitations, plus both Booster Gold's return and Multiversity promised as things that will actually happen in 2013, it seems as though setting yourselves up with a book that stars Booster Gold and is poised to explore the multiverse and the effect on same by Multiversity is a no-brainer. That said, it might wait until after Multiversity is actually on the shelves, to give it a stronger launch. That said, Rip Hunter and company would provide DC with a platform to once again try a super-science book that isn't as rooted in war comics (Blackhawks) or unrecognizable characters (Challengers of the Unknown)--hopefully that will give them more of a chance at success. Lois Lane One of the things that modern comics have lost is the supporting cast, which is a shame. They lend the larger-than-life protagonists of superhero adventure comics a kind of grounding in reality that makes them seem more vulnerable and relatable, and so heightens the drama when those characters are in trouble. Combine that with Gotham Central--one of the best books of the last 20 years at DC, which followed the impact of superheroes on everyday cops trying to do their job in the worst, most violent city in the world, and you have a possibility for a genre-bending look at journalism, sensationalism and superheroics in the New 52. Imagine a Daily Planet-centric book starring Lois Lane...maybe even one that doesn't have to have "Superman's Girl Friend" in the title! Dealing with the never-ending press of super-science, magic and of a job where the globe could be knocked off the top of your building at any given moment by a rampaging monster has to be a fascinating and terrifying job. Why not let the readers in on that? A little genre diversity doesn't hurt, either...