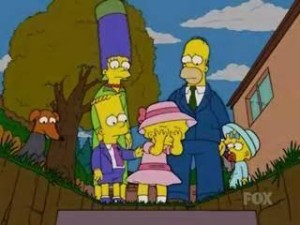 This week, Fox renewed The Simpsons, the longest-running scripted series in primetime, for an unprecedented twenty-sixth season...and apparently, in doing so, they strung along a mystery that fans are already clamoring for the answer to.

The "mystery" death of a supporting character, teased in a number of recent interviews, will apparently now take place in the Season 26 premiere, according to veteran Simpsons producer Al Jean.

That the death is supposed to be of a character for which the actor has won an Emmy, Entertainment Weekly notes, the search for possible candidates narrows to Anne Hathaway, Kelsey Grammer, Marcia Wallace, Jackie Mason, or any of the series regulars with the exception of Harry Shearer--meaning that Mr. Burns, Smithers, Ned Flanders, Principal Skinner, Kent Brockman and Reverend Lovejoy are all apparently safe.

That's particularly notable since, in the immediate aftermath of the announcement, Mr. Burns and Reverend Lovejoy were two favorite candidates when fans started to speculate who might be the next to go.

Saying that the story they're working on is both funny and "an emotional story," Jean told EW that they would be seeeding false leads this season to keep fans on their toes and that at present, the secret is so tightly held that the actor whose character is marked for death doesn't yet know.

Not that it would be likely to impact anyone too severely; most of the regular cast members play multiple characters, so if it's someone who relies on The Simpsons for a steady paycheck they're probably fine. Two popular candidates, Kelsey Grammer's Sideshow Bob and Marcia Wallace's Edna Krabappel, though, are strong candidates...although killing off Flanders's second wife would seem like piling on, wouldn't it?