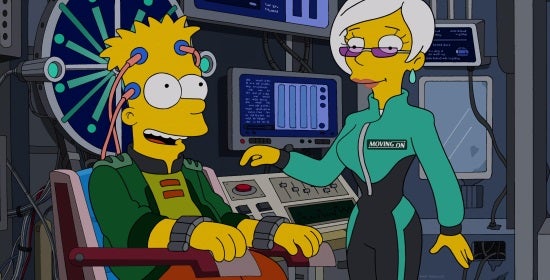 A new episode of The Simpsons, "Days of Future Future," airs tonight on Fox. In "Days of Future Future," set in the future, Homer has a new clone for every time he dies. Lisa is married to a zombie version of Milhouse, while Bart deals with custody issues with his ex-wife, Jenda. Each defines what love means to them. The voice cast includes Dan Castellaneta as Homer Simpson; Julie Kavner as Marge Simpson; Nancy Cartwright as Bart Simpson and Nelson; Yeardley Smith as Lisa Simpson; Harry Shearer as Skinner; Hank Azaria as Moe, Pamela Hayden as Milhouse and Jimbo; and Tress MacNeille as Dolph. The Simpsons, "Days of Future Future," airs Sunday, April 13 at 8:00 p.m. ET on Fox.