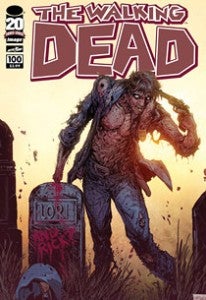 artist Ryan Ottley is one of a handful of pencillers being tapped to create variant covers for Robert Kirkman's upcoming landmark hundredth issue of his Image/Skybound series The Walking Dead.

That image, featuring fan-favorite character Michonne slicing her way through some walkers, was unveiled today at The Hollywood Reporter, while Image co-founder Todd McFarlane, one of the men who brought Kirkman into the fold as an Image partner, drew one that's on display at TV Guide.

In spite of how the McFarlane variant appears, representatives for Skybound told reporters that while Rick "has seen better days," he hasn't been turned. Whether the images have anything at all to do with the interior art is unclear; the main image by Adlard appears to be a metaphorical image looking back on the journey of the book's first hundred issues, while rumors of another major death between now and the end of the current story throw into question whether Michonne will really be up and around by issue #100. 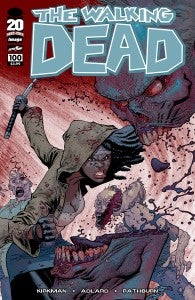 Comments in at least one of the stories seem to confirm that the artists on variant covers have little or no special insight into what's going on between the covers they're drawing.

"When Robert asked me to draw a cover for  The Walking Dead, he said the magic words: 'draw whatever you want,'" Ottley told THR. "So I was totally excited to do something 'action-y' with Michonne and her sword. She's always been my favorite character in the book, and soon to be in the TV show as well. And it's always fun drawing zombie gore, especially with swords!"

Shawn Michaels Gives His Prediction for Edge vs. Randy Orton at WWE Backlash