iOS game, optimized for iPad and iPhone 5, launched at midnight this morning/last night, meaning that fans can already download the app for $1.99, a "limited introductory price" that will rise to the app's regular price of $2.99 once the game isn't brand-new anymore.

Titled The Walking Dead: Assault, the game begins at the moment in the Image/Skybound graphic novel The Walking Dead: Days Gone Bye when disoriented Sheriff Rick Grimes awakens in the hospital without knowing how he got there. The player is transported to those first isolated moments to revisit the early days through Atlanta, the campsite, and all the fan's favorite locations, surrounded by danger in all directions.

And in case you missed it, this game is more of an adaptation of the comic books than of the TV show or even of the more general "universe of The Walking Dead" that we've seen from the Telltale Games version. Just how much more? Here's how Robert Kirkman's Skybound and game developer Gamagio put it:

"Players assemble and upgrade their ultimate team of four, chosen from The Walking Dead favorites: Rick, Lori, Carl, Glenn, Shane, Andrea, Carol, Sophia and Dale. Players utilize the characters' unique abilities to fight their way through the undead hordes while completing bonus objectives and challenges to unlock exclusive content from The Walking Dead including artwork, wallpapers, behind-the-scenes trivia, and Game Center achievements. The game allows players to collect future episodes that parallel the ongoing comic timeline. Players can join The Walking Dead universe and prove their skills to other players with Game Center leaderboards, four levels of difficulty and endless possibilities for challenges.

"The Walking Dead: Assault features authentic locations from comic book series all visualized in a 3D art style based the comic series iconic look. Playing as their favorite characters from the books, users can trigger distractions including flares and car alarms in order to keep their team safe from walkers, all while utilizing intuitive controls designed for iOS. The Walking Dead: Assault features a Universal App allowing a one-time purchase to run on all of the purchaser's Apple mobile devices. The game is optimized for the iPhone 5 retina display and is automatically enhanced for iPad."

It also uses art inspired by Charlie Adlard's comic book work, word balloons and comic book-style sound effects. You can check out a gallery of screen captures from the game below. Click on one to see it in more detail. 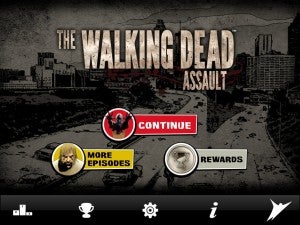 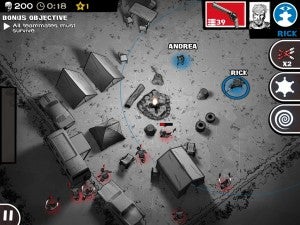 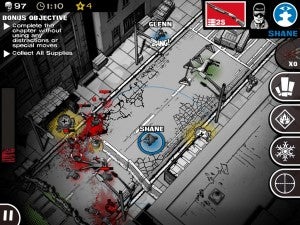 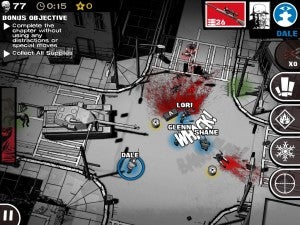 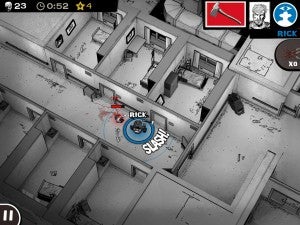 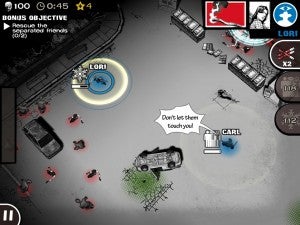 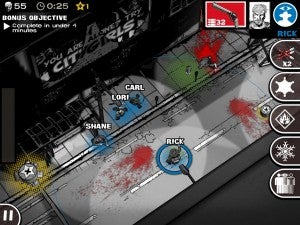 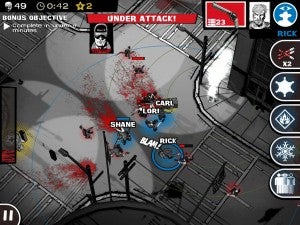