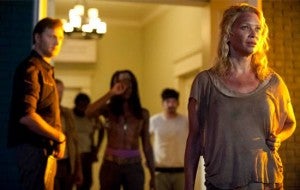 After having been notably absent from the last episode of The Walking Dead, Michonne and Andrea appear again in the second teaser clip for this week's upcoming episode, titled "Walk With Me."

The pair are chasing a plume of smoke which, if you've seen interviews this week, fans will be able to identify pretty readily. What's at the end of that plume? Nothing good, but it does lead to the return of a fan-favorite character.