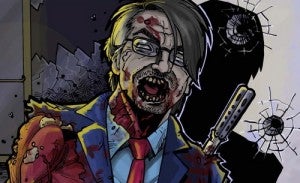 Last night, Glen Mazzara--executive producer and post-Darabont showrunner on AMC's The Walking Dead--held an hour-long Q&A, conducted via Twitter, during which time fans of the show could ask him more or less whatever they liked. As we've done in the past, ComicBook.com was there to take notes...!

Also, Mazzara said that for fans whose questions he didn't answer, he would be periodically answering more throughout the week at his Twitter page, so if you don't see your question (or one you'd like) answered here, follow him on Twitter, or shoot him a question with the Twitter hashtag #walkingdeadchat.

Christine Oeste: Who was the most difficult character (and if not the same) and actor to kill off?

Glen Mazzara: Shane was the most difficult character to kill off. Bernthal really wanted to stay.

Ben Day: Is T-dog going to take the place of Tyreese? He hasn't had the screen time he deserves.

We have big plans for T-Dog in season three.

Adam Lindsey: Will the helicopter tie into The Governor/Woodbury?

That helicopter will appear again in season three.

Billy Collins: Say Lori had a mid/late-term miscarriage. Would the unborn baby be a zombie and eat its way out?

Lori does fear her baby being born a zombie.

Suz Z: Ok, SHANE took cuffed Randall to the woods. What happened to his handcuffs? The walker randall wasn't cuffed...

We just thought Walker Randall pulled his cuffs off.

Cody Rhoads: So did the lone walker shane was looking at represent the walkers moving out of Atlanta or something else?

The helicopter was the same one Rick saw [in the pilot]. That herd took weeks to get to the farm.

Lacey Wolkens: How did Carl's gunshot attract the horde but the shot Shane fired didn't?

Who says it didn't?

Christina: The zombies aren't exactly stealth and silence creatures, why didn't Rick and Carl spot them til so late?

They had a lot on their mind, don't you think?

Juan Rosales: How does Sarah feel about Lori being so very hated? She's doing a great job.

This is tough for her--and surprising.

No. They are two different characters.

Trish: I'm a black woman and didn't understand or like the brilliant last scene with the BLACK zombies in chains! I'm sure u guys didn't mean harm but should think. Black men in chains with potatoes sack pants= slaves

Michonne is a major character in the comic book. She uses those walkers to repel others.

No Sex in the RV: When the herd in Atlanta saw the helo and started following, were they feeding on the horse Rick rode?

No, the herd was eating a dog.

Mark Brennan: How long into the Apocalypse are we in at the end of the season 2? Less than a year?

We are only about four months into the apocalypse at the end of season two.

Stephen: A la 28 Days Later, why don't the dead decompose and the survivors just outlast that?

Everyone is infected, so there are always new walkers.

Jade Magin: I don't think it was a fortress at the end, wasn't it like a prison or something?

The prison is a major storyline in the comic book.

Andrew: Any chance we hear from Morgan or Duane next season?

We haven't decided when Morgan and Duane will be back. But we do miss them.

Evan Kutz: Will Andrea be angry at the group after being left on the farm?

Andrea doesn't know if the group is still alive.

Mariah: So the barn, did you guys build that to burn it down? Or did the owners give you permission?

We built the barn then burned it down.

E-ean: Did you guys consider how fast Randall's leg healed in the time of capture to release? Seemed too quick.

Randall was always limping and they were forcing him to walk. He wasn't healed.

Lara Miatto: They don't have silencers for the guns?

We wrote the 212 teaser with silencers but some folks thought that was implausible.

Evan Kutz: How long was Rick in a coma before waking?

Jeannie Cisneros: Will Andrea meet up with everybody else? If so will she be pissed for them leaving her?

Yes, they get the script one week before it shoots.

Donald Poor: What does the title "Besides the Dying Fire" mean? Is it as simple as the barn or something deeper?

This title was a little more indulgent than I usually allow. I had been up all night.

KOBC: How many seasons do you plan to run?

I would love to get to 100 episodes. That's seven seasons.

Jen Fuhrman: If there were a zombie apocalypse, would you fight or say screw it and give in?

Actually, I'm pretty good in a crisis so I am ready for a zombie apocalypse.

Nick Bryan: Where are all the zombie animals?

Animals do not get the virus.

Mike Burns: Since "the French were getting close to a cure," do the survivors have any hope of being cured?

I actually pitched a scene set in a French lab with subtitles. Writers thought I was nuts.

Taco: Are we going to be expecting any visitors in the prison besides walkers!?

Irin Burcusel: We all know that Daryl will be taking on a new leadership role, but to what extent?

We have great Daryl stuff for season three.

David Fallin: How will the violent nature of the prison stay and the Governor translate from the comic to the TV series?

We can't have violence for violence's sake. But we ARE pretty violent.

M: Are there going to be any zombie children?

We've already had Sophia and the little girl in the pilot. I imagine there are more.

Chris Ceglecki: Did you guys ever consider having Shane kill Rick in the field? Would've been more dramatic and intense.

We did talk about it but this is Rick's story, not Shane's.

Maggie Pfeiffer: What's the story behind the person who dies in the RV?

Jimmy was on the farm. Beth's boyfriend.

Andrea Herschberger: Why did you have Rick kill Shane instead of Carl?

The Governor and Michonne.

George Oversby: How come those two men in the bar didn't turn into zombies?

Rick shot those guys in the head.

Julio CUT: Are The Governor and Michonne the only new characters in season three?

No, we have many new characters in season three.

Juan Rosales: Does the group believe Rick re: Shane making him kill him?

Jeannie Cisneros: When is the walking dead video game coming out? Also will it follow the show so far or cover more of the future story line?

Not sure when the video game is coming out. There will also be an arcade game.

(B) Berthrong: Will we ever get a glimpse/flashback of what started the zombie apocalypse?

This is never addressed in the comic so we have no plans to show how it started.

Elisa Mancina: Will we see more flashbacks in S03? Daryl/Merle's for example??

I really don't like flashbacks. Why does everyone ask for them?

Patrick Khensovan: Is the 3rd season going to move at a faster pace? Specifically, will we see Lori give birth?

Season three is the same pace as the past few episodes. We are on the move!

Original Boo Bear: Who do you think is the strongest in the group? Mentally and physically?

Frank: Any chance the Morales family from season one, could come back?

Walkercount: Lori's baby needs to die before its born, turn into a zombie fetus, eat its way out. Kill her in most horrific/painful way!

Michael Galligher: Will Andrea continue to be a badass in season three? She seems to have recieved universal praise from the finale.

Jonah Patrick: Given his killing of Shane & his "Ricktatorship" meltdown at the end of the finale, will we get a more ruthless Rick in season three?

Yes, and that's good if he's to take on The Governor.

Season three starts shooting in May.

Brian Bullion: Did you consider Jenner telling a different secret in season one finale?

No, that was always Jenner's secret.

Yes, and a very good one.

Sheila Sunarjo: Is the zombie epidemic happening only in Atlanta (US) or is the whole world infected?

The whole world has gone to sh--.

Jon Snow: How are you going to handle Chandler Riggs growing faster than Carl?

We have frozen Chandler so he stops growing.

Cait Lin: In the first scene of last night's finale, was that a flashback to the very beginning, or just a few days prior?

Flashback to the beginning.

Trevor Robbins: Does Michonne have the zombies on her side to get past other zombies?

Alex Langdon: What were the walkers actually eating when someone was getting munched on?

Jeffrey Harbin: So what was it about David Morrissey that sold you on him as The Governor?

David really nailed it. You'll see. We could not be more excited.

Sound effects. No chickens were hurt until lunchtime.

Chandra M. Jordan: Was the prison shot at the end of the finale CGI or real?

Suz Z: Did Maggie and Hershel know Sophia was already in the barn when our guys were still searching? Thought I caught a glance...

No, Otis put her in there just before he was killed.

Michael Ruiz: Why didn't Rick turn into a Zombie in the hospital? Shane said he had no heartbeat!!

Why would you listen to Shane?

Finally Dreaming: Did you know Daryl would become such a "love" interest for fans or did it surprise you?

I love Norman but was caught off-guard.

No. It was written first.

Raúl A. Rojas García: Are we going to see Tyreese on the series? He is just too badass to not appear!

Let us get Michonne and The Governor up and running first.

Lauren Wilds: Why is it the turning process has become faster? Will we see a zombie Dale?

No zombie Dale. He was shot in the head. Ouch.

Nicole Davis: What is the time lapse from when the group was searching for Sophia and their return to the highway in the finale?

The finale takes place twelve days after they found Sophia.