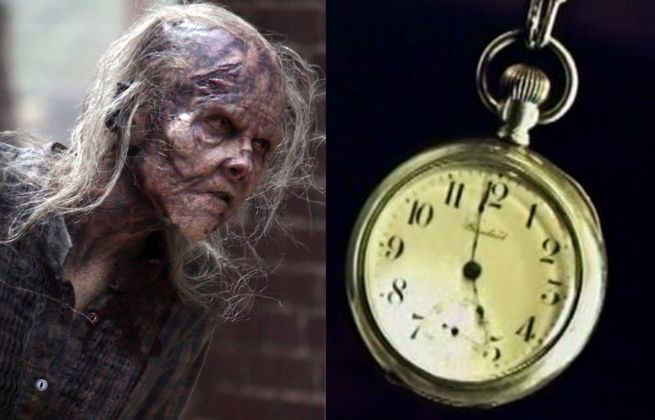 The Walking Dead is known for including clever Easter Eggs in episodes. Most of the Easter Eggs tend to be tributes to past horror and sci-fi movies, such as the Robocop Easter Egg in the “Strangers” episode.

While appearing at the Walker Stalker Con in Atlanta this weekend, The Walking Dead executive producer, director, and special effects guru Greg Nicotero revealed an ongoing Easter Egg involving watches and clocks in the series.

In The Walking Dead Season 5 premiere, when Rick and the others are trapped in the train car, Rick is seen using a chain to carve a shiv.

“He’s using Hershel’s watch with the chain,” explained Nicotero. “And then when he leaves, Maggie gets it, so of course if you see Maggie has the chain with the watch. And of course the time is 5:01 on the watch, because that was episode 501.”

Nicotero continued, “So if you look at any of the stuff in the show…even when Carol picks up Rick’s watch off the table, it says 5:01. Every episode that we shoot we adjust the time on the watches and the clocks to whatever episode it is we’re shooting.”