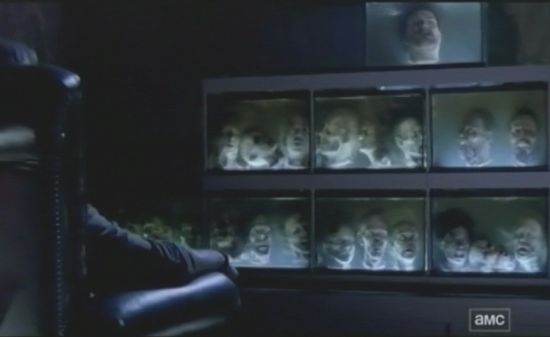 After the first two episodes of The Walking Dead focuses on Rick and his group taking the prison, the third episode finally let fans see more of Michonne and The Governor. While comic book fans are already familiar with these two characters, many TV viewers only are just now learning more about Michonne and The Governor. Here are the five most shocking scenes from the “Walk With Me” episode of The Walking Dead.

5. Helicopter Crashes – In the first scene, viewers get to see the mysterious helicopter again. However, things aren’t going well for the pilots and passengers in the helicopter as it crashes lands in the trees.

4. Merle Returns – As Andrea and Michonne hide in the woods, they hear a voice behind them. Andrea recognizes Merle’s voice, but Merle doesn’t recognize Andrea until she turns around. Merle first takes out a zombie with his bayonet hand, then he delivers the classic line, “How’s about a big hug for your old pal Merle?” Andrea responds by passing out cold.

3. Michonne Kills Her Pets – Worried that the Governer and his men will hear her zombie pets, Michonne uses her katana to cut both of their heads off. Michonne has had her pets for a long time, so to see them decapitated by her own hand was definitely surprising.

1. The Governor’s Fish Tanks – If killing the National Guard soldiers wasn’t bad enough, the episode ended with a classic scene from the comic book series. The Governor entered a locked room, sat down in a comfortable chair, and started watching zombie heads floating in aquariums. One of the heads was of the soldier Lt. Wells, which The Governor evidently killed.