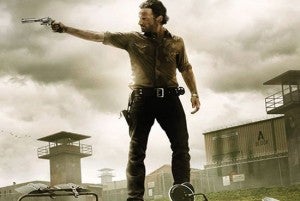 According to Robert Kirkman, AMC's television adaptation of his hit comic book series The Walking Dead will add a new, popular character from the source material on its December 8 episode.

“There’s a new character added,” said Kirkman of episode 8. “A big deal fan favorite from the comic book is introduced into the show in this episode, so be on the lookout for that.”

Entertainment Weekly, who conducted the interview, speculated that the character introduced will be Tyreese, the former NFL player who most famously cleared a herd of walkers all by himself after being locked in with them. The character also had relationships with Carol and Michonne in the comics. Speculation is that The Wire's Chad Coleman may get the coveted part, since he's been spotted in Atlanta during filming.

Tyreese was widely rumored to appear in this season when it was discovered that the prison storyline was going to be a big part of the show, since he's a major player during that period of the comic's publishing history. AMC and Kirkman have steadfastly refused to speculate about when he might show up, and last night was no exception.

Asked by EW whether the character being introduced is Tyreese, the writer/executive producer balked at an answer.

The Walking Dead to Add Fan Favorite Character in December