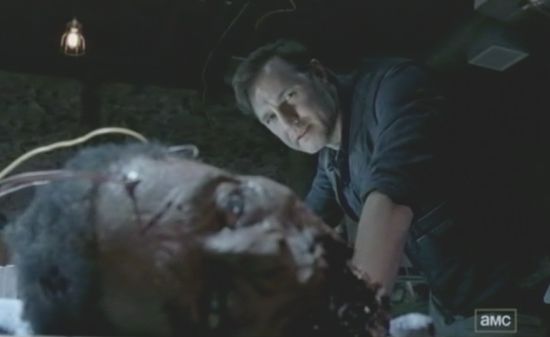 While the “Walk With Me” episode of The Walking Dead didn’t have as much zombie killing action as the first two episodes, the show did raise a lot of intriguing questions. Viewers were introduced to The Governor and were given their first extended look at Woodbury. Michonne also got quite a bit of screen time, but her character still remains mysterious. Here are the top five questions in the “Walk With Me” episode. Be warned that some of the answers contain spoilers from the comic book series.

5. What’s going on in the lab? – Milton is a completely new character for The Walking Dead TV series, so there’s no referencing the comic books to figure out what he will be like. Milton is conducting experiments on zombies and communicating his findings to The Governor. Is Milton just trying to figure out how to control zombies or is he looking for a cure?

3. Is Merle going soft? – While Merle has been one of the most reprehensible characters on The Walking Dead, he shows his softer side in a rare moment. After Andrea tells Merle that her sister died, Merle says “Your sister. She was a good kid. I’m sorry to hear it.” Later, when The Governor shoots one of the fleeing soldiers in the back, Merle has a look on his face like he feels a little uncomfortable about the whole situation. Could Merle have developed a conscience?

2. Why does the Governor keep zombie heads in fish tanks? – In a shocking last scene, The Governor walks into a locked room of his house and sits down to stare at a wall of fish tanks. But rather than fish, these aquariums contain cut off zombie heads. While this might seem unusual to TV viewers, readers of the comic books know that with no television that The Governor has to find other sources of entertainment.

The Walking Dead Walk With Me: Five Questions Raised