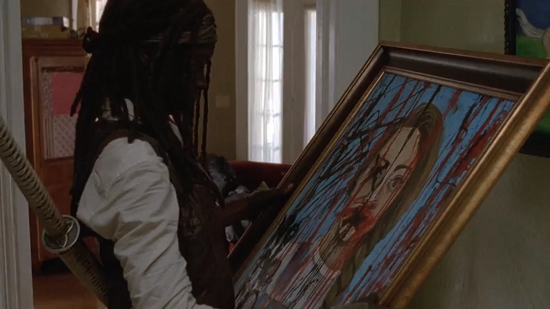 Throughout the second half of the season on AMC's The Walking Dead, Michonne and Carl's discovery of a handful of paintings in a house in the episode titled "Claimed" has been a source of some interest and speculation on message boards.

For a long while, fans suspected that the photo above might actually be Lizzie, and that the paintings might be symbolic of the journey that the group would make for the rest of the season.

There's an apple (we couldn't get a decent shot of it and so didn't include it), which doesn't seem to have a ton of significance. 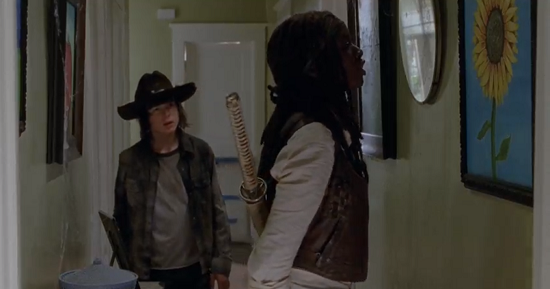 There's also a sunflower -- and a lot of people though maybe that tied into the Lizzie aspect of the painting above, since "look at the flowers" was a thing for her. However, in today's episode, we find that there are quite a few sunflowers outside of Terminus (including a whole garden of them in front of the "Please lower your weapons" sign. Are the filmmakers suggesting that those paying attention to the sign are "looking at the flowers" and allowing the beautiful distraction of Terminus to rob them of their common sense and line them up for execution? 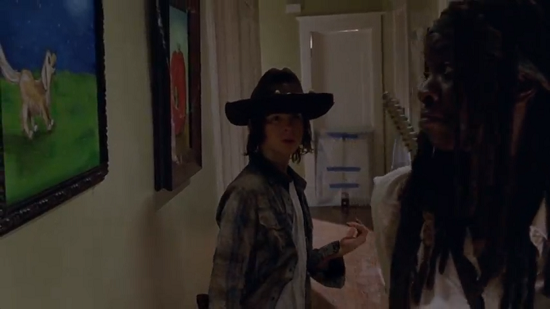 And there's a dog -- drawn in profile, so it's hard to tell whether it could be Lucky, the one-eyed dog. 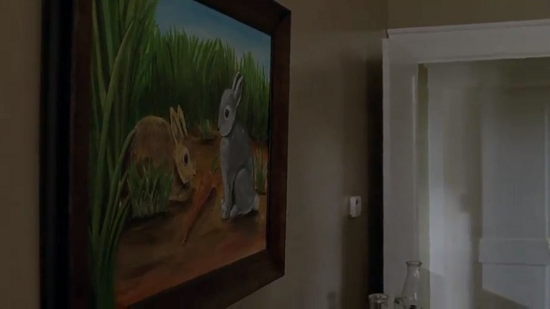 There are bunnies -- again, seemingly a reference to Lizzie's story. 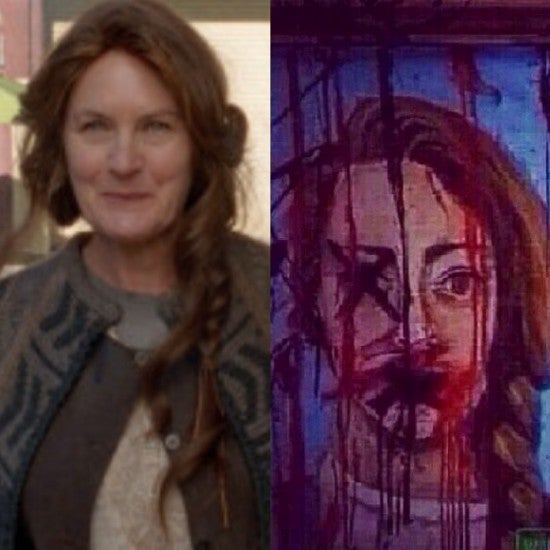 The image at top, as assembled by a Redditor, makes a pretty convincing argument that it's not actually Lizzie but Mary, the woman we just met at Terminus. The hair, the layers of clothing...it's very similar, and while the painting has Lizzie's eyebrows, that may just reinforce the idea that these paintings are figurative representations of the journey rather than a literal connection between Terminus and that house.

Of course, if it were a connection between Terminus and that house -- just playing Devil's Advocate, here -- it would suggest a connection between the bloodbath in the nursery, Mary and possibly even the dog that distracted Daryl, getting his guard down and ultimately contributing to Beth's kidnapping.

Considering that one of the most popular theories going around about Mary and Terminus is that the food on that barbecue is human meat -- maybe even Beth's in particular -- any potential connection to Beth's abduction shouldn't be taken too lightly (even if they seem to somewhat strain credibility).

In any event, if this woman and members of her community left to found Terminus, it could explain all the well-kept homes that Rick and his group are finding along the way; it's been a little odd all season long that places that showed little or no sign of having been overrun by the undead were just...vacant. If members of the local community collectively decided to find somewhere more safe for some reason, it could explain both that element of the community and also why the survivors found very few vehicles in the second half of the season, except those cracked up on back roads or in traffic jams.

It seems that there are too many coincidences to be truly unimportant; there are too many similarities for it to be truly metaphorical, but too many elements from disparate and seemingly-unconnected stories to make it all part of a coherent whole. Whether and how these paintings are referenced in next week's season finale could be interesting.

The Walking Dead: Were These Paintings About Mary From Terminus?

Rick and Morty Is Taking Over Highways with Some Epic Cars