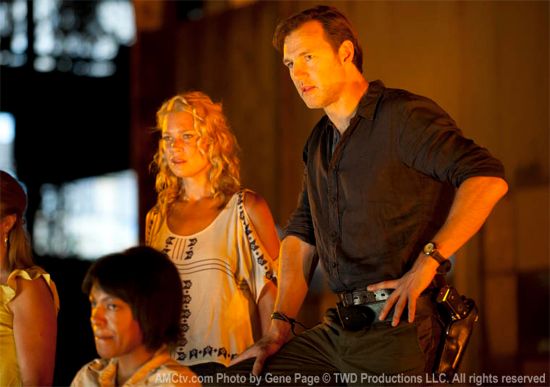 While Lori Grimes often was the woman that fans loved to hate because of her affair with Shane, there is another Walking Dead female survivor who seems to have questionable taste in relationships. Lori wasn’t the only one who hooked up with Shane, as Andrea also had a fling with him.

In a Talking Dead bonus episode, host Chris Hardwick observed, “Andrea seems to gravitate to whomever seems to have power. And it was Shane, she hooked up with Shane. Now, she’s with Michonne. Then, maybe Merle.”

Executive Producer Gale Anne Hurd agreed, “Yeah, you know, for the most part, she might be making some bad choices. We’ve all done that.” Then, Hardwick added, “And even The Governor a little bit too. She kind of got a little…like I don’t know if that’s intended or if it’s the way that she’s playing him.”

The big question now is who is Andrea most likely to have a relationship with next. She’s definitely bonded with and developed a strong friendship with Michonne, but they seem to be at odds over whether to leave Woodbury. She’s been cozying up to The Governor, and she might be attracted to his position of power. And oddly enough, she doesn’t seem to be entirely repulsed by Merle’s flirtations. What’s your prediction for Andrea’s next romance?

The Walking Dead: Who Will Andrea Hook Up With Next?