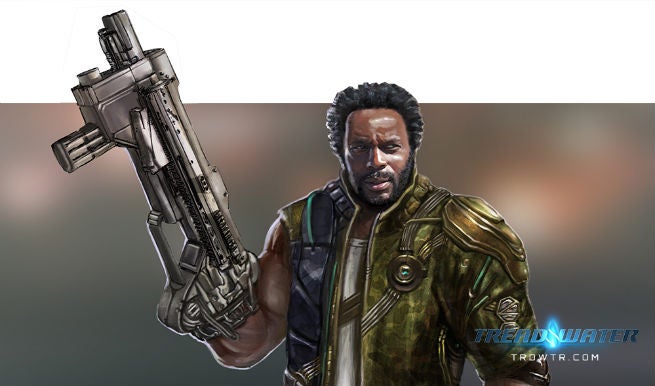 During his appearance on Talking Dead Sunday, The Walking Dead veteran Chad L. Coleman mentioned that he has taken up the role of executive producer on a new project, Treadwater.

The project, which features an interactive website featuring motion comics, is described as a "graphic novel franchise" by its creators.

The project has been developed as "a transmedia experience" that comprises 30 chapters of a graphic novel, a TV series, a video game and an interactive web experience (when you sign into their site, you take an "entrance exam").

Treadwater has been in the works since 2012 but is currently nearing completion.

The story of TREADWATER takes place 15 years into the future, where the crash of the Euro has led to a resurgence of authoritarian regimes on the European continent. The graphic novel series tells the stories of 6 uniquely desperate people who have been recruited by a private organization to maintain what little peace there is left.

The first graphic novel of the 30-part series came out in October 2014 via Amazon. It is expected to hit stores nationwide in March or April of this year. The novel has been written and created by Morgan Rosenblum, founder of Darkrose Studios, and illustrated by Ray Dillon, best known for his work on Borderlands 2 and Game of Thrones.

The creative team behind Treadwater mocked up the image above of Coleman as a character in the world of the story to celebrate the announcement -- and yes, they noted that his missing arm can't be a coincidence.

A Bunch of DC Movies Are Leaving HBO Max on Halloween