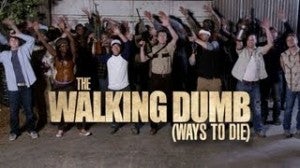 The folks behind a series of popular Internet parody videos, have taken on AMC's The Walking Dead in their newest video.

The new music video, shot the famed Rocky Point Haunted House, incorporates the song "Dumb Ways to Die", based on the PSA campaign by the same name, which went viral for its bizarre approach to public safety.

The video (the first of the two embedded below) features not only violence and gore, but a ton of spoilers for AMC's The Walking Dead, all the way up to this season. The second video below is a behind-the-scenes look at putting the video together.

The Walking Dead's Latest Parody: Dumb Ways to Die in the Zombie Apocalypse