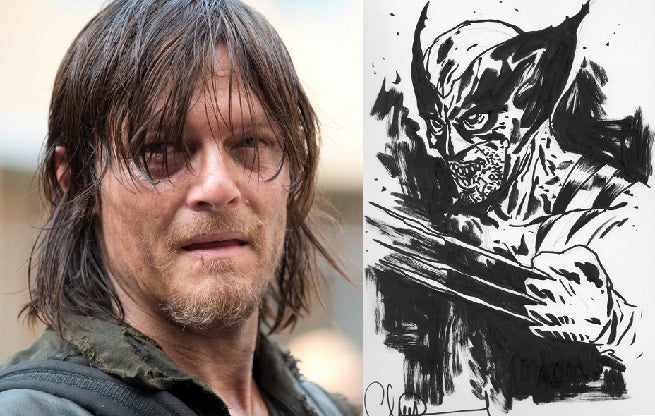 It's hard to argue that Daryl Dixon doesn't fit into the mold of a character like Wolverine -- the unkempt, plays-by-his-own-rules loner who finds a home and family among a team he was initially reluctant to join.

So, it's probably not surprising that when Robert Kirkman and Chris Hardwick joked about crossing the two over on Talking Dead, it got silly pretty fast (and generated a bunch of buzz on Twitter).

"He's, I think, on one tree found the X-Men," joked Chris Hardwick about Morgan Jones, who stumbled across another of the "marked' trees left behind by the residents of Terminus in tonight's episode.

Without missing a beat, Kirkman quipped back, "It's a crossover."

And then Hardwick responded that the sound you just heard was a "collective nerd boner," effectively killing the joke.

Being dead in the comics and all, maybe Wolverine has some time on his hands and could come hang out for a bit. Maybe some of that moonshine would be a good experience for him now that his healing factor is gone.

Fox, who own the screen rights to the X-Men franchise, distribute The Walking Dead internationally. Just saying.