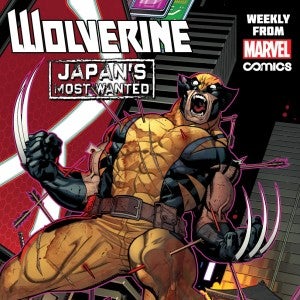 Since it was announced at South by Southwest, fans haven't heard as much as you might expect about Wolverine: Japan's Most Wanted. The digital, weekly Infinite Comics series launches today and ties nicely into The Wolverine, which hits theaters later this month and is set in Japan. The film will likely feel a bit familiar to fans of the series, since both will feature the Silver Samurai and "hordes of ninjas." Elements of the Marvel, such as Wolverine losing his immortality, are seeping into the print comics in the coming months, as well. "Following the critical acclaim we had with Guardians Of The Galaxy and Ultimate Spider-Man, fans are primed to immerse themselves in comics like never before as we  take advantage of the technical aspects of the digital reading experience and continue to bring them to the next level," explained David Gabriel, SVP of Publishing, Print & Digital Sales. "By providing these comics on a weekly basis, we are furthering our commitment of bringing a new kind of digital reading experience to a wider audience than ever before."