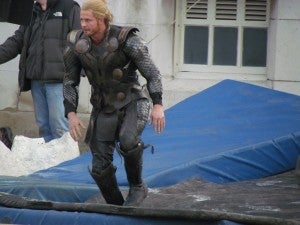 A series of new set photos showcase Chris Hemsworth's stunt double and quite a bit of property damage--and according to a story at Comic Book Movie, there's a bit of spoilage at play here. Read on at your own risk.

CBM have pulled together a number of recent reports to cobble together some photos, video and an account of what's going on at the set, where Kat Dennings just tweeted about having been.

It's worth noting, perhaps, that Thor is back in his chainmail sleeves again. Wonder what makes him go back and forth throughout the course of the film!

“All the rubble and stuff is from a spaceship that crashes into the grounds. It’ll be added with CGI later on. So will more of the damage caused by the crash. The wing also destroys the pillars on the left (in this picture), that are covered with blue. Malekith leads an army of elves over the rubble, which is where the ship would of crash landed. On Monday, they were filming a scene that was supposed to be set outside Charing Cross underground station. I assumed this meant that Greenwich was just doubling for other areas as normal. However, it’s actually also doubling for itself! From what I remember, there are two worlds occupying the same space, and it has something to do with the Prime Meridian Line (or timeline as the guy insisted on calling it. I vaguely remember them saying it has a mystical or magical aspect about it.”

Thor: The Dark World Gets Intergalactic