That movie had so many in-universe references and clever hints of things to come that it felt like an episode of Arrow. Which got us thinking--our readers tend to enjoy it when we collect up the week's Arrow or Agents of S.H.I.E.L.D. references. Why not take that same critical eye to the movie?

So some of these will be pretty obvious, and others not so much. Also, we'll probably miss some. Feel free to chime in below the story, telling us in the comments what dopes were are for not realizing that something belongs on the list.

The things we won'tmetion, because it seems pointless, are the references made specifically to be references; dialogue that specifically calls out the events of Thor or Marvel's The Avengers was pretty common in this film and it didn't take a sharp wit to recognize it, just being conscious and having seen the previous films.

What did catch our attention? 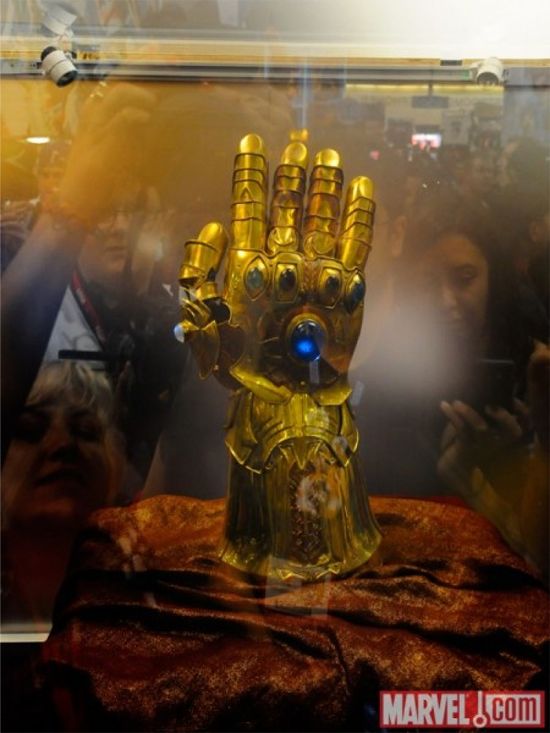 Lots of setup for the Infinity Gauntlet

Obviously, there was a post-credits sequence that explicitly tells us that The Collector is out for the Infinity Gems, but even before that it's confirmed fairly early in the film that the Aether is one of them.

"They're usually stones, but this one is different," Odin tells Jane. Apparently so is the Cosmic Cube, which Marvel Studios president Kevin Feige has acknowledged is the Space Gem. In any event, Odin gives an Infinity Gems for Dummies explanation to Jane so that viewers who haven't read 30 years' worth of comics will still be able to follow the next few movies as, we assume, The Collector continues to gather resources. Odin explains that you shouldn't have two of these in any one place, which almost makes us wonder whether The Infinity Gauntlet has already happened and The Living Tribunal has already split the Gems among the Infinity Watch.  That would subvert expectations somewhat and give the Marvel Cinematic Universe a different take on the first big Gauntlet story than the comics had.

It also begs the question: If they're going to assemble these things one at a time for a while, might we get a Thor 3 and Avengers 3 announcement at the same time, with the third Thor film dealing with Odin and his history with the Gauntlet, and culminating with everything coming together in Thanos's possession in time for the third Avengers movie?

Even though Feige recently said they aren't big fans of "trilogies" since the stories have to continue more or less indefinitely, all of the contracts are structured around three films per franchise for now, so if it's your last movie with a bunch of the actors it makes sense to make it huge and epic and give them enough backend money to persuade them they want to return for more.

That stone giant Thor battles at one point in the film? If he looked familiar, it's probably because his look and wardrobe are cribbed pretty much directly from Planet Hulk, as we've discussed before. There, his name is Korg and he fights the Hulk, but in the history of Thor, he's part of a race called the Stone Giants, who invaded Earth but were turned back by Thor in his first appearance back in the '60s.

When Thor goes to Loki’s prison to ask for his help, there are some other strange-looking creatures that can be seen in a cell in the background. These creatures are actually The Marauders, which in the comic books are a group of mutant assassins employed by X-Men villain Mister Sinister. However, Fox owns the movie rights to the X-Men and their villains, so The Marauders are different in the Marvel Studios world. The Marauders are a group of rag-tag invaders of the Nine Realms in Thor: The Dark World.

When Captain America appeared briefly in the film (sort of), he did so wearing his costume from Marvel's The Avengers. Possibly because his current, Winter Soldier-friendly uniform really ought to debut in Cap's own movie. Of course, there's a more logical reason he looks the way he does in the film: it's how Loki remembers him.

We saw them in posters, so it's arguably not much of a surprise that they've shown up again...but since the birds appeared in both Thor and The Avengers--as well as in the original mythology that gave birth to this film's characters centuries ago--it's worth noting that they were much more present in this film than they have been in the past.

During the film’s climax, the realms begin to converge and viewers get a peek of appears to be Muspelheim, Surtur. This is the fire demon who attempts to bring upon Ragnarök, the Norse version of the apocalypse.

Which is, conveniently enough, one of the stories widely believed to be a strong contender for Thor 3.

Along with some interesting conspiracy theorizing, the folks over at CBM are pretty sure that they saw a poster in the movie that makes an allusion to Journey Into Mystery, the comic in which Thor first appeared.

Says the writer over there, "I believe there was a poster in London that read something to the effect of 'Live the Journey, Explore the Mystery.'"

There's a bit more, too, but we'll leave that for a whole other story...!