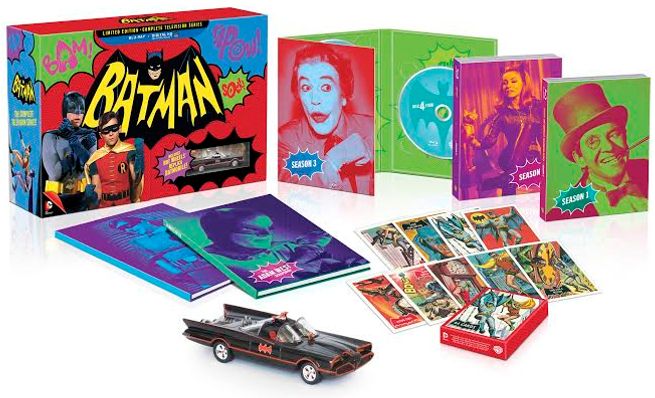 That was my exclamation on Saturday, November 8th, not only because this TV series' nigh-permanent spot atop my personal DVD wish list, but because even I was shocked to receive Batman: The Complete Television Series (1966) at my home three days prior to the official in-store release November 11th (guess there's something to be said for pre-ordering).

If you were a faithful viewer of the 1960s Batman show, 2014 has already been a watershed year, what with DC Comics, in cooperation with various toy manufacturers, releasing several waves of action figures and collectibles, and the Dark Knight's in-house publisher delivering exemplary new and original stories monthly since 2013.

As a guy whose childhood was fortified with Batman reruns after school in the early 1970s, this has been the first time any of this sort of merchandise has been readily available to me and other fans in stores.

Which is why it's funny – and darn timely with the holidays fast approaching – that the centerpiece has finally hit households after years of corporate legal wrangling, freeing up the Dynamic Duo, Batman and Robin, to do what they do best: entertain families and comic book geeks in the comforts of home. Anyone who collects classic television in high-definition formats would be doing themselves a grave disservice to skip out on Batman: The Complete Television Series.

Not only is the series an entertaining embodiment of 1960s television, this particular package is easily one of the best productions in terms of quality and thoroughness since the Blu-ray market began. But make no mistake, despite the collection I acquired featuring all three seasons of the show, along with extras and superlative packaging, it will take more than one writing here to share with you the proverbial "good, bad and ugly."

The packaging for the Limited Edition has multiple fun aspects to it.  Since it's ultimately a Warner Home Video release (with a credit to FOX, original owners of the show), you may have seen similar boxes for collectors editions of The Wizard of Oz, Gone With the Wind and Casablanca. Brace yourself for disappointment if you were looking for something that easily fits in a shelf containing your other Batman-related DVDs.  The DVD version of the complete series would fit that bill (while lacking all of the collectible accoutrements), and news broke just this week that 2015 promises Blu-Rays of the show in more cost-effective bundles.

Personally I wanted it all, AND NOW, so something that requires its own dedicated space on a shelf was totally worth it. On the right side of the box is a button that plays the classic Batman theme song.  I kind of noticed it late into receiving this, and I don't think I'll push it too often because it's built into the box in such a way that prohibits an easy battery replacement. Two bonus items come in the box: a shrink-wrapped package of vintage cards that I will NEVER open, and a Hot Wheels Batmobile that will, yes, remain in its plastic container no matter how nicely my young daughter asks to play with it.

Speaking of which, last summer's Batman marathon on IFC made a convert out of my little girl.  She was already a fan of the Joker, and seeing the lively mustachioed Cesar Romero as the Clown Prince of Crime pretty much sealed the deal. Along with dedicated multi-disc cases for each season, a softcover episode guide is included along with the hardcover "Adam West Scrapbook."  The cases are adorned with Technicolor headshots of all the principal heroes and villains of the series in glossy cardstock. Sure as the Bat-phone is red, this is one pretty box.

Season One of Batman laid the foundation for the series in terms of routinely visiting villains to Gotham City and the roles played by the supporting cast (Commissioner Gordon, Chief O'Hara, Alfred and Aunt Harriet). The first season features showcase appearances by the villains most recognized and revered by Bat-fans in the decades before and after this aired two nights a week on ABC: the Joker, Penguin, Catwoman and the Riddler.  All deliver star turns here (never mind that most all were already Hollywood staples) along with Mr. Freeze (one of three overall of the show who had the opportunity to wield the deadly freeze gun), the Mad Hatter, False-Face, King Tut and Bookworm, the last three listed here created specifically for the live-action format. In my next installment, I will share with you the Season One highlights of these villainous appearances along with the occasional misstep that regrettably had too many fans apologizing for this series' role in Dark Knight Detective history for far too long.

Seeing how well this DVD release has been received by the public at large during 2014, I think Batman has found its way back on the right side of history.

To the Bat-Review, Robin!: A Four-Part Look at The Batman '66 Blu-Ray