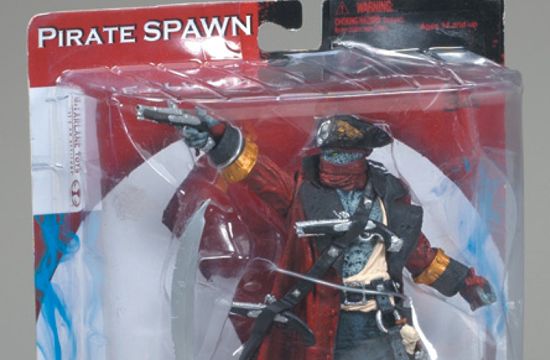 In an exclusive interview with Comicbook.com, Todd McFarlane talked movies, actions figures, and comics. In an earlier article, we covered how McFarlane would soon be freeing up some more time to work on the much-anticipated Spawn movie. We also asked McFarlane about the possibility of more Spawn action figures and a return of the Spawn animated series. As McFarlane explained to us, all those things tend to go hand-in-hand. Comicbook.com: Is there any chance that there could be a new line of Spawn action figures coming anytime soon? Todd McFarlane: Yeah, but as I've told people, the world sort of shifted a few years back. Where we use to be able to do almost anything with not only the Spawn stuff, but we did the twisted fairy tales and twisted Christmas, and Clive Barker and I came up with the Tortured Souls. We use to be able to do all this cool stuff, right. But there used to be the stores that would buy that on a regular basis. You had stores like Suncoast, Tower Records, Virgin Records, and stuff like that. And all of that made complete sense. But now those stores have either amalgamated, disappeared, or gone bankrupt. And those options of doing some of that cool stuff have been limited over the years. I mean, much to my chagrin, as I'm as big a monster, creep fan as there is. And the chances of getting it into the Walmarts and K-marts of the world are getting harder, because they are a little more risk adverse. They want sort of big brand names. They want stuff that everybody knows. Not, you know, Todd come up with something crazy and then we'll put it out there, where there used to be a market place, there used to be stores that were basically willing to do that. Comicbook.com: Is there any action figure line that you've always dreamed of doing but haven't been able to because the license isn't available or because it wouldn't sell? Todd McFarlane: No, I wouldn't say there's one in particular that I would like to do. I've always had this sort of fantasy that the way the world should work, and I know I'm completely delusional, but to say that every license no matter who gets it, there should be a paragraph that says, "You Mattel get to do Spider-Man exclusively from head-to-toe in all categories, but McFarlane Toys gets to make one." I'd love to do like one Spider-Man, one Batman, one Star Wars. There's all these big brand names that I'll never be able to touch, because the big Fortune 500 guys just have too much power and money for me to be able to make the dent on it. Just give me one, just so I could say, "Here's how I would do it if I had the whole line." Anyways, that will never happen, so I have to go and find properties that are sort of diamonds in the rough that will grow into big properties, where the big boys can back up their Brink's trucks and take the licenses away. Comicbook.com: Is there any plan to do the Spawn animated series again? I think I remember reading it would come after the movie. Todd McFarlane: Yep, the ideal situation, and again the name Todd only rhymes with god, I don't get to set it all up, we get the movie out, that begats the animation, which then allows me to say with a straight face with some big stores guys that I think you should be having some Spawn toys back out in the marketplace. And it all sort of starts feeding off each other. As popular as The Walking Dead comic book was and as great of a job as Robert has done, it took the TV show to be able to push that into being a retail property in a big way outside of sort of Diamond Comics stores. And so to me the same rules would apply to something like Spawn. I need to come up with a reason for them to put in on the shelf. And the reason would have to be something big in the media with them. And so that's either TV or film. On February 1, 2014, McFarlane will be doing a signing of Joe Namath NFL Legends and Eli Manning NFL Super Bowl figure at the Times Square Toys "R" Us store, as part of special events the store is doing around Super Bowl XLVIII. We are having a giveaway of two sets of the autographed figures. Follow us on Twitter and retweet our post about the giveaway to enter. Keep checking back for more from our interview with Todd McFarlane.

Sonic Frontiers Reveals How to Get In-Game Soap Shoes