This is a topic we've covered before, and some of the same ground will be covered because, let's be honest, a lot of this stuff hasn't changed. But with the Veronica Mars Kickstarter catapulting "brilliant-but-cancelled" TV series back into the foreground, a new season of Arrested Development on the way and X-Files Season Ten coming down the pike from IDW, it seemed as good a time as any to reassess our list of cancelled TV series that should live on in comic book form. Here are some ground rules: We're going to look at our old list and remove Veronica Mars, Pushing Daisies, The X-Files and Bored to Death, since they've all got continuations ready to go, except Pushing Daisies, for which showrunner Bryan Fuller is already exploring either a comic book series or a Kickstarter campaign for more film/TV. Licensed properties have always had sporadic success at best from DC and Marvel, but it can be argued that they haven't been top sellers in part because they're not a priority for the companies, marketing-wise. Titles like The Lone Ranger, Ghostbusters and True Blood have not only performed well for smaller publishers, but helped to elevate their company's profile in the mainstream bookstore market, which may not be watched by comic book fans as closely as direct market sales but which has more potential upside in many ways. Series like Smallville and Buffy the Vampire Slayer have been big success stories in comic books, and The X-Files is on the horizon. But for every one of those, there are botched and aborted adaptations that make readers wonder why they were ever made in the first place...or digital-exclusive comics marketed only to fans of the show, without regard for the comics market (we're looking at you, Burn Notice). There's also the questions of whether a canceled show would really even work as a comic (the fast-moving, scene-changing nature of shows like the returning Arrested Development and on-the-bubble Community make imagining how they would keep their tone in another medium a hard thing to do), or whether its fan base would buy into comics as a way to tell the story (I can't see fans of Men of a Certain Age or Memphis Beat taking in large numbers to their local comic shops). All of that considered, what are the ten shows we'd most like to see revived as comic books? In alphabetical order, since it's hard to prioritize such a thing...!

The Adventures of Brisco County, Jr.

(or Jack of All Trades) Bruce Campbell has something of a following in comics quarters and either one of these beloved and hilarious (but short-lived) series could make a go of it as a comic. Most would probably lean toward The Adventures of Brisco County, Jr. as the more marketable of the two to a wide audience, although within the comics community westerns rarely make the kind of money you hope they will and Jack of All Trades seems ready for a quick turnaround on the four-color page. Sprinkle in participation on some level by Campbell and his rabid fan base wouldn't be able to get enough of it. 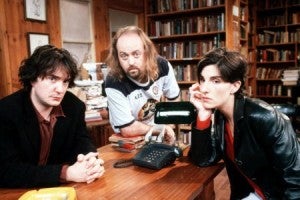 Where Spaced is something everyone wants to see more of, it had a strong ending and really there's little need to build off of it from a practical point of view. Meanwhile, Black Books--made by many of the same people and appealing to much the same demographic of fan--seems to just...end. With no real resolution for any of the characters, it can be argued that as long as you've got good stories to tell there's nothing in the structure of the original series that would be hurt by adding to it. A comic like this could appeal to the readers of a company like Oni, who no longer get to publish the Clerks or Scott Pilgrim comics that were once the cutting edge of their line. 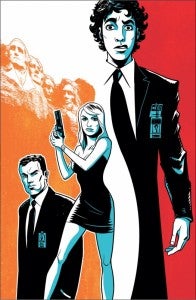 Chuck This one (and one or two others on the list) have already been comics, but the story--produced in the waning days of WildStorm and given priority as a freebie on the NBC website, not really as a product in its own right--wasn't treated seriously and while it started with a lot of promise it descended into a barely-understandable mess by the end of its six-issue life. The TV show never had any sustained problems with its quality, although it's been ratings-challenged almost from the word go. The biggest challenge facing a feature film is the way they ended the series--it would really require more serialized storytelling to "fix" or to do justice to, which makes it difficult for a movie to handle. But it would both be fertile ground for new stories in any potential comic series--and there's almost nothing that doesn't make sense about an action-comedy featuring a Joss Whedon alumnus and a hacker who has DC Comics posters on his walls becoming a comic series itself. If at least ten percent of its 2012 viewership were able to come along for the ride, they could start Chuck: Season 6 in the fall just in time for the new TV season, having missed only one year during the "hiatus." Fringe There have already been a number of comics based on Fringe, and they've been generally pretty well-received by the show's fans. It's also in the same position now that Chuck was in last year--if they elected to start a Fringe Season Six comic book in the fall, they could literally have no full calendar year when the property was dormant and fans weren't getting new stories. Tell me that's not appealing. Gunsmoke One of the longest-running and most successful TV series of all time, why do we need more Gunsmoke? Well, the same reason we need more Superman. Because a new generation will have a new take on the characters and concepts, and because it doesn't make sense for the rights-holders to just let something this valuable (and frankly cool) languish. Western comics have been an interesting beast in the recent past; Dynamite has had some luck with licensed properties like Zorro and The Lone Ranger, while different iterations of Jonah Hex have struggled to hit the kind of numbers DC wants even while they've been some of the best books on the market. Gunsmoke, then, could find a home with a mid-level publishing like IDW and probably really flourish. Plus, imagine the initial burst of enthusiasm. It would be like when Dynamite did The Man With No Name. 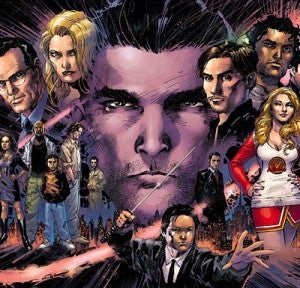 Heroes OK, so both the TV show and the online/collected comics that went with it fell apart in a big way after the first season and have been largely disparaged as a directionless mess. Still, the premise was strong and the showrunners' original idea to trade off sets of main characters once a season could work well as a series of interconnected miniseries that could well turn out to shine a light on the Heroes universe without spending too much time dwelling on the rather preposterous threads created to accommodate keeping characters around who were written as one-trick ponies. Extra added bonus: Bryan Fuller, of Pushing Daisies fame, could work on this with the same people hes' been trying to do the other comic with. M*A*S*H* Again, this series had a good run, and it's really not in need of a wrap up. So why carry it on? Well, because there are already two slightly different takes on the concept that have been committed to film. Continuing where the feature film left off and doing a series based on that, without necessarily having to be beholden to the events of the beloved TV series, would be a way of "rebooting" the series without actually damaging the continuity in any way. Also, let's be honest, war comics and humor comics are both things that are in pretty short supply. I can see this being an absolute gem in the right hands. Quantum Leap This one probably should have been a comic book already, and with fellow '80s genre icon MacGyver getting an Image Comics miniseries and potentially a new film, it will almost be surprising if Quantum Leap doesn't get similar treatment soon. I'd love to see Dan Jurgens on this, considering the way he ably handled the time travel aspects of Booster Gold's second volume. Perhaps Jeff Katz, who worked on the series with Geoff Johns before Jurgens was tapped as writer, would be a more realistic choice, though, since he has Hollywood connections... Sports Night While Aaron Sorkin's cult classic show is the least genre-friendly of the titles listed here, but that doesn't make it less comics-friendly. I'd love to see Matt Silady, creator of The Homeless Channel, take over a book like this. Someone with a great sense of visual storytelling and an ear for dialogue could make a fun, cinematic comic that would do the show justice and broaden the storytelling genres of whatever publisher was to pick it up. The nice thing about Sports Night is that, since it's based on a TV series, you can always inject new ideas, new characters and new challenges without feeling particularly forced. After all, behind the scenes at a TV series is a pretty crazed place, and with all the money at stake, there's always somebody willing to do something crazy to get to the top. 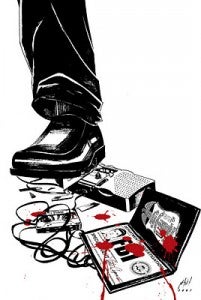 Twin Peaks While David Lynch appears to have put the kibosh on such a project ever happening, comics artist Matt Haley once had what looks like a pretty promising start on a Twin Peaks: Season 3 graphic novel, meant to be included in the deluxe "Gold Box" edition of the home video release a few years back. We're left with a small handful of sketches that hint at what might have been, and a couple of seasons that compose one of the most enduring and creative shows ever to hit commercial airwaves. As the first in a series of hour-long dramas like The X-Files and Lost which created massive genre buzz, a cult following and created a once-every-ten-years success cycle that still hasn't found its next member. How cool would it be if Twin Peaks itself were to return before something else stepped up to take that role? For the first time in years, series co-creator Mark Frost appears to be suggesting that there may be some light at the end of the tunnel for long-suffering Twin Peaks fans...but until there's a concrete plan in place, Twin Peaks--one of the greatest shows ever on television when it was in its heyday--will keep a spot on lists like this.

Top Ten Cancelled TV Shows That Should Continue As Comics 2013