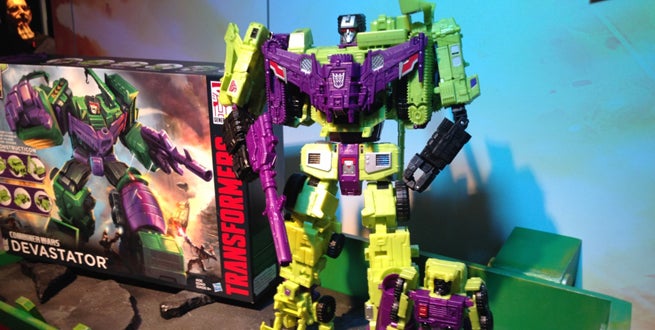 The robots in disguise are poised for another big year. Hasbro has a new cartoon, Transformers: Robots in Disguise debuting March 14 on Cartoon Network, and of course has new toys to support it. However, the focus for most of the line is "Combiner Wars," and luckily for fans that means a new edition of the biggest, baddest combiner of all, Devastator.

The "Combiner Wars" is a storyline that will play out in the toys, the new mobile apps and games, and also in IDW Publishing's Transformers comic book line. In fact, the second mini-series for Windblade, a fan-created character, will be a "Combiner Wars" crossover.

Of course, that all means new toys featuring combiners, characters who are made up of other, smaller Transformers. The big deal is Devastator, a new $149 MSRP set coming this fall. He's made up of, as always, Scrapper, Hook, Long Haul, Bonecrusher, Scavenger, Mixmaster. Hasbro pointed out that the 80s version of the character was the same size as just one of the individual 'bots that make him up this time around, and as you can see in the images, that boast rings true, and he is huge.

Defensor was also announced, with a Viper 'bot that has the Cobra logo in it (literally the only thing G.I. Joe related at Hasbro this year, incidentally). Fans will have their hands in creating a brand-new Combiner, too, by voting for attributes like origin, vehicle modes, and even eventually gender, it was teased.

Check out some of the new figures Hasbro's offering in 2015, including new mini-cons, launched from their larger pals, some of the aforementioned TV tie-in toys, and plenty of "Combiner Wars" action in our gallery below, and start saving up that hundred and fifty bones for a few months from now.