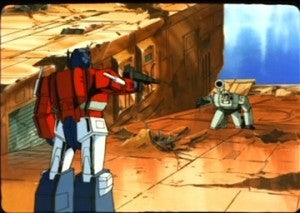 Spoiler alert up top here, folks--it's still unclear whether the leaked script is on the level or not, but if it is, major plot points ahead.

Released to Unleash the Fanboy, a script purporting to be the most recent draft of Michael Bay's upcoming Transformers 4--120 pages of potential spoilers. Here's how the site describes the nature of the find:

"I can’t give you any specifics about our source, fearing that he may lose his job, but he works in a “secure document disposal” firm, and it just so happened that a copy of the latest Bayformers script (revised on 11/30/2012) came across his path.  After some hours of research, we think this is a legitimate copy (thought we can’t be certain), so we’re really stoked to share it with you… but don’t kill us if we’re wrong."

UTF claims that the script features Unicron as its central antagonists, with characters like Galvatron replacing Megatron as the leader of the Transformers and Primus, the "Unicron killer" joining the Autobots' cause. They also claim the Dinobots will appear. 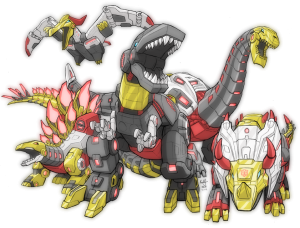 Below are the bullet points, as given by UTF, which explains that the film begins with Galvatron becoming possessed by Megatron after downloading his memories from his corpse, and that in the course of the corpse-theft, a human named Josie gets injured and ultimately turned into a cyborg called Circuit Breaker:

Reading it through, it sounds too good to be true for Transformers fans, so it probably is; there's an awful lot of pretty hardcore geeky stuff in this story, and the introduction of Unicron, Galvatron and the Dinobots all in one film might be a lot for the casual viewer to process.

On the other hand, it's the first new chapter following the first trilogy, with new human leads confirmed and Megatron ostensibly gone.  And given the popularity of Transformers: The Movie among fans, which saw the Dinobots join the fight against Galvatron and Unicron, it's not beyond the realm of possibility that as Bay's last move he would want to put some of those characters and concepts into use, giving the hardcore fans something to be excited about.