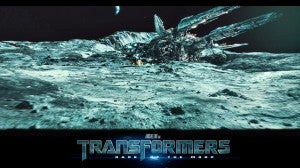 Giant robot with a laser axe. Now, which person am I going to show up as to watch this movie? Will it be the guy who appreciates tight plotting, subtle character development, clever dialogue, and award-caliber acting? Or is it the 8-year-old kid who goes, “AW, NAW!” whenever said giant robot whips out that flaming laser axe and goes to town dispensing justice?

After a four hour DMV visit and a pounding headache, three hours worth of Michael Bay film weren’t a welcome prospect. See, these days there are summer blockbusters and then there’s “Directed By Michael Bay.” The guy not only subscribes to the clich “Go big, or go home,” he also eats its clich d little grandchildren for Thanksgiving. I think I have a greater appreciation of Bay these days, much more than I used to. He’s a very American director, maybe the most American. That’s not an insult to America or Bay; he doles out the good American cozy feelings with the bad American overabundance. And when he makes a movie about giant murderous robots, he makes a friggin’ movie about giant murderous robots.

“Transformers – Dark of the Moon” kicks off with a legit fun opening that mixes historical footage with new Bay-ish additions. After we learn more, we get Buzz Aldrin (played by Edwin Aldrin) himself exchanging pleasantries with Optimus Prime before confessing what we just learned. There actually was a conspiracy behind the 1969 moon launch, except instead of being filmed in a Hollywood studio somewhere they actually did go to the moon like everyone thought. What’s more is Buzz and Neil had a secret task to explore a crash-landed alien spaceship and bring back more than just moon rocks. 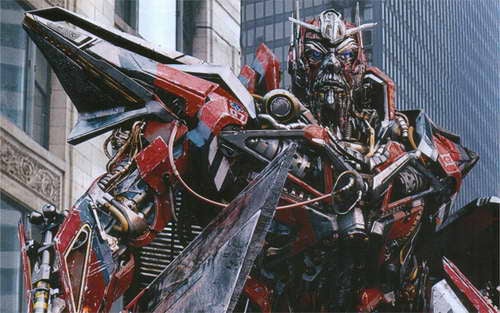 Um, plot? Ok, turns out the crashed ship was in fact the Ark, familiar to longtime Transformer fans. It carried the former Autobot leader Sentinel Prime as well as some pillar macguffins that help create the Space Bridge, another familiar piece of ‘bot history. Optimus Prime, having the Matrix of Leadership, is the only one that can bring Sentinel back to life, and so the Decepticons want a piece of him. Because of all this, Chicago gets the heck destroyed out of it, and people die in horrible and explosive ways. Cue Sam Witwicky (Shia LaBeouf) and his new super-model girlfriend (Rosie Huntington-Whiteley) to help save the day and offer cute jokes and screaming and fleshy bits.

After a strangely slow first arc, my brain finally started switching from my angry, bitter grown-up self to my way-cool and rad kid self. I think it was when Shockwave (!) showed up in Chernobyl riding an underground monster-bot that looked like a mixture of the worms from “Tremors” and the smoke creature from “Lost.” How am I supposed to apply logic to that? How am I supposed to be reasonable and sensible and not lose my brain thinking how cool it is that Shockwave is riding a gigantic Hell-worm through the wastelands of Chernobyl? That’s stupid, ridiculous, and so over-the-top I should be offended at the absurdity of it. But I wasn’t.

This is not “The King’s Speech.” This is not “Casablanca.” This is toys come to life, a boy and his car and all the fun stuff and adventures they can have fighting the great forces of evil. It’s saying, “Ha! Now you’re dead! Ha! No I’m not, and I’m more powerful than ever!” and meaning it with all the passion a boy and his car can have. It’s about helicopters and spaceships and robot shotguns and dogs and girls in tight clothes and booms and spinning and buildings falling over and all the lunacy a crazy high budget can buy.

I went in expecting what I got and therefore was not disappointed. Once I shut myself up and came to appreciate the bizarre humor, oddball characters, and ludicrous battle scenes, I enjoyed myself and was very entertained. Expect more than that from a Transformers movie and you’ll always be let down.

But, seriously, is Grimlock too much to ask for?

Transformers - Dark of the Moon Review