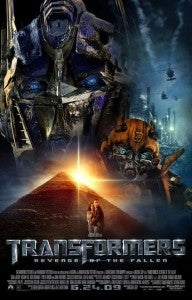 While Transformers: Revenge of the Fallen will probably end up being the number one movie at the box office when the dust settles on this weekend's movie receipts, early reviews of the film suggest that this could be one of the worst comic book/action figure/sci-fi adaptations of all time. Michael Bay has received sharp criticism for his work on the film over the first two installments, and judging from some of the rather pointed comments made about this entry into the Transformers' universe, it could very well be warranted. Noted film critic Roger Ebert, in giving the film one star, pulled no punches, stating in part of his review that the film, "is a horrible experience of unbearable length, briefly punctuated by three or four amusing moments." Ouch! Ebert went a bit further, hammering away at the actual robots themselves by saying, "They are dumb as a rock. They share the film with human characters who are much more interesting, and that is very faint praise indeed." Tasha Robinson of The Onion's AV Club, in giving the film a C-, summed up the basic thrust of her perception of the film in this statement, "For far too long, the movie consists of chase scenes, scrotum jokes, shrieked conversations, broad slapstick, and depressingly regressive ethnic caricatures." One constant in her review, Ebert's and others has been the lack of acting ability from both Megan Fox and Shia LaBeouf, with MSN critic James Rocchi noting that LaBeouf spends, "half the film doing third-rate Danny Kaye tricks to depict mental freak-out and the other half running in slow motion yelling "Optimus!" Transformers: Revenge of the Fallen is getting hit hard in the press, but will it suffer the same fate as the Will Ferrell bomb Land of the Lost, which debuted in a disappointing third place on its opening weekend and has since slid out of the top five spots at the box office? The likely answer is no, but for a film with such a high budget investment, a second weekend with a third place finish or less could be a disaster. Based on these early reviews, perhaps Michael Bay has reason to worry.

Transformers: Revenge of the Fallen Early Reviews Not so Favorable