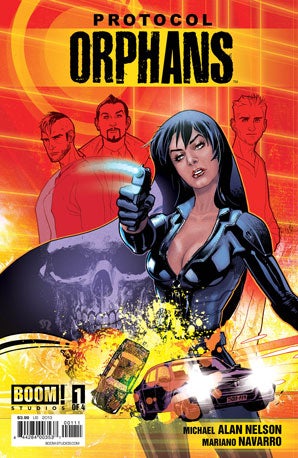 Midtown Comics in New York City will host Twilight and Nurse Jackie star Peter Facinelli, along with his producing partner Rob Defranco, for a signing appearance in support of their new book, Protocol: Orphans #1 from BOOM! Studios, on Wednesday, November 20, 2013 at 7:30 p.m. at the Midtown Comics Downtown location.

Purchase of Protocol: Orphans #1 is required to attend the signing, and one additional personal item may be signed.

Facinelli and DeFranco are the creators of Protocol: Orphans. Written by Michael Alan Nelson and drawn by Mariano Navarro, the series is described as "an action-packed espionage series with a compelling cast of young characters struggling with their transition into adulthood. Adopted by the government. Trained as deadly spies. Abandoned by everybody but each other."

The publisher compares it to fun spy fiction like TV’s Alias or Mission: Impossible; you can probably throw NBC's Chuck and Oni Press's Frenemy of the State on that list, too.

"I love a good espionage story," said BOOM! Studios Editor-in-Chief Matt Gagnon. "Protocol: Orphans delivers; it's a smart, stylish, and fast-paced thriller. If you miss shows like Alias, you're in for a treat."