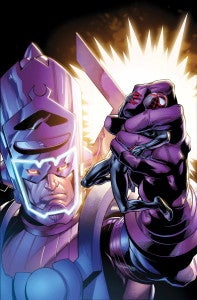 In yesterday's Marvel Comics solicitations, one of the biggest takeaways was that Miles Morales is coming to the Marvel Universe.

This wasn't one of those things that particularly clever people were able to suss out from reading a few different solicitations together and making an intuitive leap--rather, it comes from a quick look at the solicitation text for Cataclysm #2. The previously-announced event that sees the "616 Universe" version of Galactus head to the Ultimate Universe hungry for an Earth-shaped snack is now officially retitled ominously as Cataclysm: The Ultimates Last Stand. And, yes, the solicitation confirms without question that the Marvel Universe will meet Miles:

CATACLYSM: THE ULTIMATES LAST STAND #2 (of 5) BRIAN MICHAEL BENDIS (W) • MARK BAGLEY (A) Cover by MARK BAGLEY Variant Cover by TBA • The ULTIMATES discover where GALACTUS has come from • If they send the WORLD DESTROYER back to where he came from all that will do is create more destruction and havoc! • MILES MORALES is headed to the Marvel Universe 32 PGS./Rated T+ …$3.99

...So there's that. The announcement of a new character appearing in Mighty Avengers by the name of Spider-Hero is an interesting addition to the roster, given the timing, and seems likely to be Miles's name--at least temporarily. It doesn't sound like the kind of name you can hold onto long-term.

Ultimate Spider-Man Joining the Marvel Universe--Is This The End of Marvel's Ultimate Line?