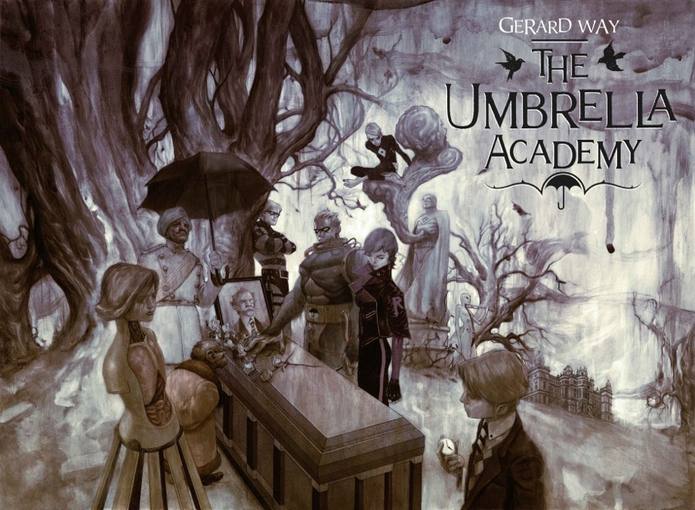 During a lengthy chat with Umbrella Academy's Gerard Way posted online Wednesday, the musician and Eisner-winning comics creator revealed that a new draft of the film script for Umbrella Academy has been turned in, and he's quite pleased with it...not that he has anything much to do with the movie.

"The most current news on that actually just came about last week," Way said. "So Rawson Thurber is writing a script. I think they're waiting on a revision that's supposed to be coming in in the next two weeks. I'm a little bit disconnected from it, in a positive way I think. I think it's cool if somebody wants to make a movie of something but I think maybe to some extent, the less involved I am the better. I can help in certain ways but only if they want the help and it's going to have an impact."

He continued, "I like Rawson's script. I think he did a great job. Obviously that was worked off Mark Bomback's amazing first script too, but then Rawson did his thing to it and I think that's also great."

Bomback is credited with writing The Wolverine, Fifty Shades of Grey and Dawn of the Planet of the Apes. Thurber wrote The Mysteries of Pittsburgh and Dodgeball: A True Underdog Story.

You can check out Way's full interview (over an hour) below, along with the official description from Google.

There aren't a lot of comic creators who can say that they've won an Eisner Award while simultaneously touring the world with their rock bands, but then again, +Gerard Way 's not most comic pros. A published artist before graduating from college, Way went on to co-create the Eisner-winning 'The Umbrella Academy,' plus 'The True Lives of the Fabulous Killjoys' during his time in My Chemical Romance. Now, with a solo album on the horizon, the writer and artist has signed on for a flurry of new comics projects including work at Marvel, Vertigo and other prominent publishers. Join us next Wednesday July 16th at 11am PT for a Live G+ Hangout with this creative force of nature in conversation with Wacom's Techman Joe and Caleb Goellner.

For more information on Gerard, please visit his website:https://bit.ly/1jrvTP4