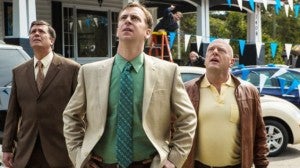 While summer is often reserved for reruns and reality programming, CBS has just shown what a good drama series can do in the summer. The Under The Dome premiere racked up 13.14 million viewers last night, marking it the most-watched summer drama premiere on any network since 1992. Under The Dome was also CBS's most-watched summer premiere among any genre since Big Brother premiered way back in 2000. Under The Dome is based on the bestselling novel by acclaimed author Stephen King and is produced by Steven Spielberg's Amblin Television. Even more amazing is that Under The Dome scored these incredible ratings in the face of some tough competition. Under The Dome was up against  NBC's final game of the Stanley Cup Finals (Boston Bruins vs. Chicago Blackhawks). Knocking summer out of equation, Under The Dome also posted the second-highest adult 18-49 rating (tied with "The Following") and adults 25-54 ratings among all broadcast network drama series premieres this television year.