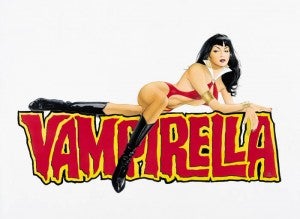 She's been around for over 40 years, and is still finding new ways to entice us. It's been announced that classic character Vampirella will make the move to Dynamite Entertainment, already the home of heroic franchises and recognizable names such as Red Sonja, The Green Hornet and the Lone Ranger. Ever since she first appeared in 1969 in her classic black-and-white magazine, Vampirella has remained a popular and iconic character, even though her publication run has had a few pauses over the years. In speaking about the news, Dynamite President Nick Barrucci paid tribute to the legacy of the character by saying, "Vampirella is one of the most well known and longest running comic characters in the history of the business. Outside of Marvel and DC characters, very few comics characters that debuted in the 60's still resonate with fans today. Our acquisition of this iconic brand is another step in Dynamite's exciting growth and builds on the ongoing success of our line."

This news follows closely on the heels of another announcement of a character changing hands, as up and coming female hero Cassie Hack, protagonist of the series Hack/Slash, will be making the move from Devil's Due Publishing to Image Comics. Both women can certainly expect bold new adventures and status in their new homes!