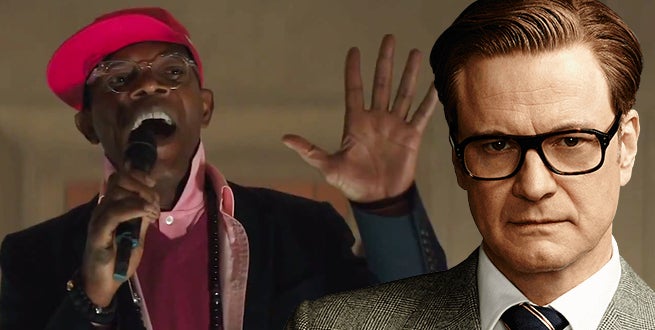 If you haven't seen Kingsman: The Secret Service yet then you shouldn't read any further as there as some major spoilers discussed.

In the film, Colin Firth's gentleman spy Harry Hart meets his demise when he is shot in the head by Samuel L. Jackson's villainous Valentine. We never actually see Hart's dead body, so there is outside shot he could appear in a sequel. Director Matthew Vaughn is trying to figure out how to pull that off. "A lot of people are very upset that Colin might not be in the sequel but I'm coming up with ideas at the moment," Vaughn told USA Today. "If people buy tickets in America, I've got a feeling we'll figure out a way for having Colin back."

Welp, us Americans did buy tickets. Kingsman debuted in second, behind Fifty Shades Of Grey this weekend, but did so with a handsome $41M debut.

While Vaughn tries to figure out how to get Firth back in the mix he knows the next tale will be focused on Eggsy (Taron Egerton). "The sequel will be 'This is the modern-day gentleman spy.' Because Harry isn't," Vaughn said. "Harry even says, 'There is a reason why we've developed weak chins.' He said that meaning, 'Look at us, we need to get new blood into this system,' and that's what Eggsy is. I joke that we've made the prequel to the Eggsy movie."

What would you like to see in the sequel?

Vaughn Will Find A Way For Colin Firth To Return In Kingsman: The Secret Service Sequel