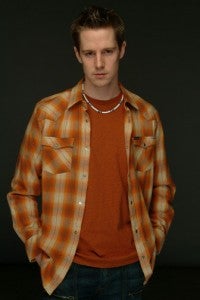 While a number of cast members had informally committed to reprising their roles from Veronica Mars in the upcoming film adaptation of the cult-hit series, director Rob Thomas revealed today that the film has officially signed its third cast member.

The first two, of course, were Veronica herself (Kristen Bell), who was on board before the Kickstarter campaign started last month. The second was a waiter--a role that was won by a Kickstarter backer who bought into it.

Today, Thomas announced the signing of Jason Dohring, who played Logan Echolls, Veronica's love interest for much of the series. Called the high school's "obligatory psychotic jackass" in the pilot, Dohring was the brooding bad boy at the center of many of the series' most popular episodes.

That through line will carry over to the film, in which he reportedly calls Veronica to get him out of trouble when he's wrongly accused of the murder of his pop-star girlfriend.

The photo at left, which accompanied the announcement, reportedly comes from Dohring's original wardrobe fitting at the beginning of the show's first season; that outfit is what his character wore in the pilot.

Earlier today, Thomas also added a $1 donation level at which fans will get a Kickstarter equivalent of a production blog--access to for-backer's-eyes-only material--in the hopes of breaking the record for most-ever backers for a Kickstarter project.