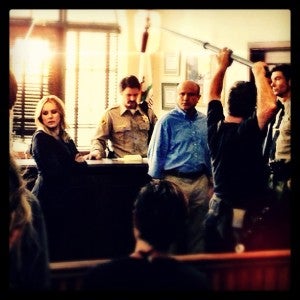 Marvel's Guardians of the Galaxy may have just begun official production, but another film we've been following--the Kickstarter-funded Veronica Mars movie--finished up late last night, according to director Rob Thomas.

"It has been a long, intense month, and there is still a tremendous amount to do. But it has also been a tremendous amount of fun, and tonight we’ve reached a major milestone in bringing Veronica back to the screen," Thomas said in a message to Kickstarter supporters, saying that he will be

The film, based on the long-cancelled teen super-sleuth show, has been in production throughout July and wrapped shortly after the cast and crew took a day "off" to go appear at San Diego Comic Con International this weekend, and throw a party for backers at the Samsung Galaxy Lounge.

"Thank you, once more, for making this all happen. Spending the past month seeing old friends, and revisiting characters who we’ve never been able to let go, has been a gift — for me, for Kristen, and for many other people. You’ve given us something special," Thomas told the backers who supported the film via Kickstarter. "We won’t forget it, and we can’t wait to return the favor."

More than five years after the end of the WB/CW Network TV series that spawned the characters, Veronica and company came back this month after a lengthy fan campaign that culminated with the Kickstarter funding. Whether they ever get to shoot another movie or not, the character's next chapter won't be so far away: Veronica Mars novels are set to begin in the spring, launching from where the movie leaves off.