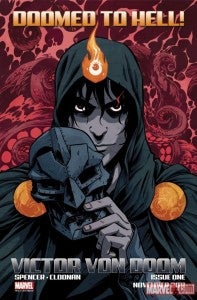 The promotional ad might say "Doomed to Hell," but in fact Nick Spencer and Becky Cloonan's Victor Von Doom miniseries is apparently headed for Limbo instead. Originally set to ship on Wednesday the miniseries, which tells the tale of Victor Von Doom's young adventures before the disfiguring accident that made him into Dr. Doom, will not ship. The book was set to be edited by the recently-laid-off Alejandro Arbona, and the cancellation was announced first by Bleeding Cool, who claimed at the time that Cloonan had not turned in any art, and then by Comics Beat, who confirmed it was a "production issue" and not Cloonan which was to blame. "I see word is out about Victor Von Doom. Trust me, no one is more bummed about this than I am," Nick Spencer said on Twitter. "Really proud of the scripts and hope to get to work with Becky Cloonan sooner rather than later."