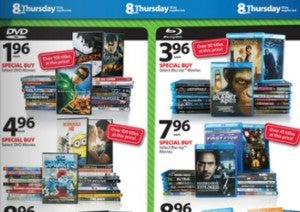 Page 7 of the Walmart Black Friday ad features a large assortment of movies, but only a couple titles are visible. The Green Lantern, Iron Man, X-Men Origins: Wolverine, and The Dark Knight DVDs appear to be available for only $1.96. The new Amazing Spider-Man DVD is also available for only $8.96.

The Walmart Black Friday deal start at 8 PM on Thursday, November 22, 2012. The deals are available only while supplies last.